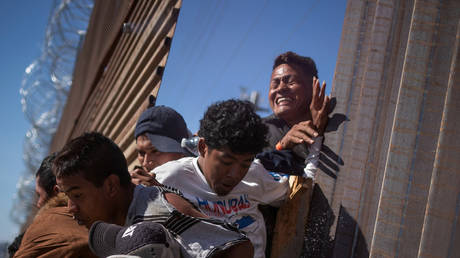 President Trump returned from a trip to the US’ Mexican border in Texas to declare the flow of illegal immigrants “an invasion.” Trump also his desire to build a border wall, claiming the US “cannot be safe” without one.

“I just got back and it is a far worse situation than almost anyone would understand, an invasion!” the president tweeted, before singling out House and Senate Democratic leaders for failing to provide funding for his planned border wall.

Humanitarian Crisis at our Southern Border. I just got back and it is a far worse situation than almost anyone would understand, an invasion! I have been there numerous times – The Democrats, Cryin’ Chuck and Nancy don’t know how bad and dangerous it is for our ENTIRE COUNTRY….

“The Democrats, Cryin’ Chuck and Nancy don’t know how bad and dangerous it is for our ENTIRE COUNTRY,” he wrote. “The Steel Barrier, or Wall, should have been built by previous administrations long ago. They never got it done – I will.”

The government has been partially shut down for three weeks as of Friday, with Senate Minority Leader Chuck Schumer and House Speaker Nancy Pelosi refusing to cave to the president’s demand for $5.7 billion in funding to build the wall.

The president has mounted an all-out media offensive against the Democrats, addressing the nation on live television to make the case for the wall earlier this week, and canceling a trip to the World Economic Forum in Davos citing “Democrats intransigence on border security.”

Also on rt.com
‘One way or another’: Trump inches toward emergency over wall & shutdown impasse


With several rounds of negotiations stalled, Trump has also teased the possibility of invoking emergency powers to get the wall built without Congressional support. Trump maintains that he has the right to declare a state of emergency, and said on Thursday that he “probably” will “do it.”

Later that day, flanked by ICE agents and Customs and Border Patrol officers, Trump declared in a video address that “one way or another, we will get it done.”

Trump has characterized the flow of illegal immigrants over the US’ 2,000-mile border with Mexico as an “invasion” before. As thousands of Central American migrants made their way through Mexico towards the US border in October, Trump called their march an “invasion,” and warned them that “our military is waiting for you.”

Many Gang Members and some very bad people are mixed into the Caravan heading to our Southern Border. Please go back, you will not be admitted into the United States unless you go through the legal process. This is an invasion of our Country and our Military is waiting for you!

50,000 migrants were arrested attempting to cross into the US illegally in December, a figure that remains broadly unchanged month-to-month. Almost 30,000 of those migrants were traveling in families, however, up 240 percent since the previous December. In addition, Mexico is the primary source of heroin and methamphetamine smuggled into the US, and a significant source of marijuana, cocaine, and synthetic opioids like fentanyl, according to the Drug Enforcement Administration (DEA).

While Mexican drug cartels make an estimated $19-20 billion per year on illegal drug sales in the US, financial concerns closer to home may undo Trump’s plans to build a border wall or barrier. Some 800,000 federal employees have not received a paycheck since the government shut down last month, a situation that might force Trump to capitulate to the Democrats and reopen the government without a wall.

As Trump proclaimed the border situation an “invasion,” news circulated on Honduran social media that a new caravan of migrants is forming and planning on starting the thousand-mile trek to the US border next week. After the last caravan overwhelmed Mexico’s border guards, the country’s government announced more agents will be placed at potential crossing points, to ensure the caravan enters “in a safe and orderly way.”