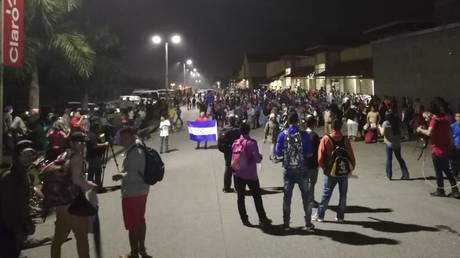 Hundreds of migrants have set off for the US from Honduras, the latest ‘caravan’ to try and enter the country. With focus once again on his planned border wall, President Trump has accused Democrats of “playing political games.”

“A big new Caravan is heading up to our Southern Border from Honduras,” Trump tweeted on Tuesday. “Tell Nancy [Pelosi] and Chuck [Schumer] that a drone flying around will not stop them. Only a Wall will work. Only a Wall, or Steel Barrier, will keep our Country safe! Stop playing political games and end the Shutdown!”

A big new Caravan is heading up to our Southern Border from Honduras. Tell Nancy and Chuck that a drone flying around will not stop them. Only a Wall will work. Only a Wall, or Steel Barrier, will keep our Country safe! Stop playing political games and end the Shutdown!

The US government has been partially shut down for over three weeks, as Trump has so far failed to secure $5.7 billion in funding for a border wall from House and Senate Democratic Leaders Nancy Pelosi (California) and Chuck Schumer (New York). Despite several rounds of negotiations, Pelosi and Schumer have outright refused to fund the wall, preferring what Pelosi called a “technological wall” of drones, infrared sensors, and security cameras along the 2,000-mile border with Mexico.

Trump has countered that a wall or physical barrier is simple and more effective than an array of sensors and devices.

As the partisan bickering in Washington drags on, the members of the latest caravan gathered in the Honduran city of San Pedro Sula on Monday, preparing to set off on a journey of over 2,500 miles that will take weeks or months. Migrant rights group CIPRODEH is accompanying the caravan, and reported some 500 members, including pregnant women, disabled people, old age pensioners, “children and unaccompanied girls,” gathering in San Pedro Sula.

Of the three caravans or more that left Honduras for the United States last year, the migrants have always given the same reasons for making the journey. Fleeing Honduras’ lawlessness and sky-high murder rate, they set off for the US seeking jobs and stability. President Trump, on the other hand, has characterized the caravans as an “invasion,” and warned the migrants to stay at home and apply for asylum legally.

Many Gang Members and some very bad people are mixed into the Caravan heading to our Southern Border. Please go back, you will not be admitted into the United States unless you go through the legal process. This is an invasion of our Country and our Military is waiting for you!

Building a wall along the Mexican border was one of Trump’s core campaign promises, and one that he has thus far been unable to achieve. The last caravan approached the border before November’s midterm elections, and Trump’s daily tweets about its progress helped drum up support for his hardline immigration policies, including the wall.

Images of the migrants pulling down fencing and swarming onto US soil were used by Trump to argue his case for the wall, while the sometimes heavy-handed response of Customs and Border Patrol agents was used by Democrats to attack Trump’s policies.