Looking at the unfolding trade war between Donald Trump and the world the phrase that should come to mind is “One good turn deserves another.”

In the case of the insane sanctions on Oleg Deripaska and Russian Aluminum giant, Rusal, back in April, we finally got some clarity as to how Russia can and will respond to future events.

In yesterday’s Treasury International Capital (TIC) report, we saw clearly that Russia activated its nearly half of its $100 billion in U.S. Treasury debt to buy dollars in April.  More than $47 billion in U.S. debt was dumped into the market to cover the chaos engendered by Trump’s overnight diktat for the world to stop doing business with Rusal. 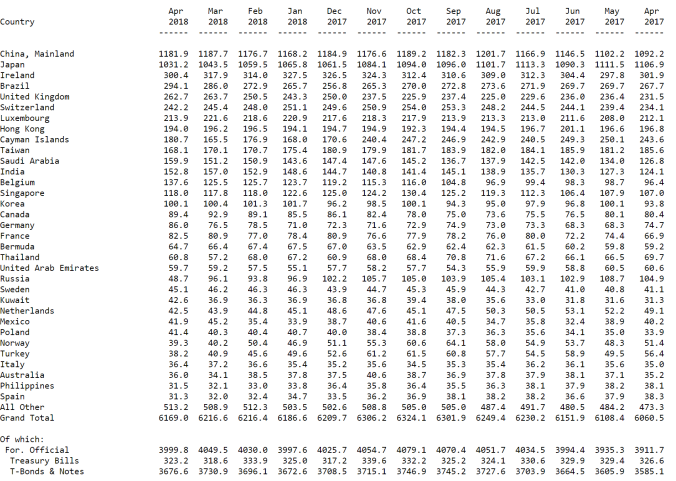 While China dropped $5 billion this is noise, ultimately as its holdings of U.S. debt have been stable for over a year now.  What is interesting is Belgium, the home of Euroclear, seeing a $12 billion inflow.  Likely that’s where some of the Russian-held debt was traded to.

The Russians likely sold from their balance on reserve with the Federal Reserve.  Here’s the latest iteration of the chart I keep for just such an occassion. 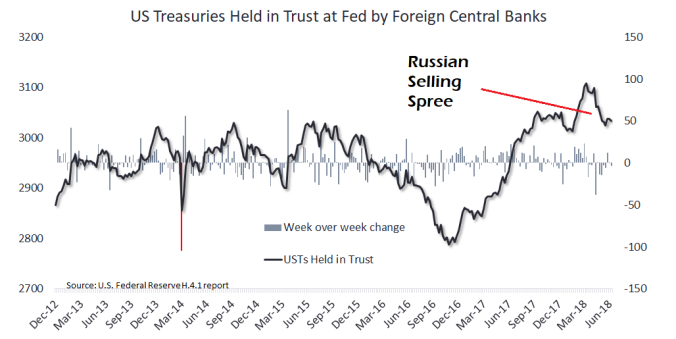 Rusal’s shares and bonds went bidless but the damage wasn’t contained there as major Russian banks like VTB and Sberbank were hit hard as well.   So, while Rusal didn’t have much in the way of dollar-denominated debt.  It did have major dollar-related obligations as accounts receivable on its balance sheet because of the sheer size of its trade conducted in dollars.

And that’s why there was such an outflow from Russia’s stock of Treasuries.  But, here’s the…