US President Donald Trump has announced import tariffs on $200 billion worth of Chinese goods. China has promised to retaliate.

The move, which sees $200 billion worth of Chinese imports slapped with a ten percent levy, comes amid a deepening trade spat between the world’s two largest economies.

The tariffs will be applied to more than 1,000 Chinese products, including consumer goods like electronics, bicycles, tires, and furniture – all pumped out of Chinese factories in vast quantities for cheap export. The ten percent tariff will take effect on September 24, and rise to 25 percent on January 1, 2019. 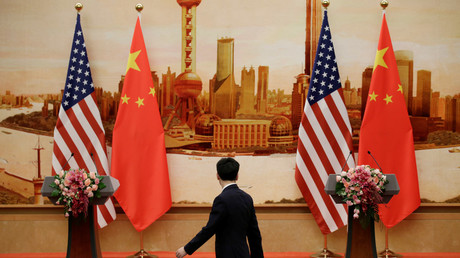 The Chinese are expected to retaliate with commensurate tariffs on $60 billion in US goods, and may withhold vital raw materials to US firms. Chinese officials have suggested that planned talks between trade delegations from both countries will now not go ahead.

“China never said it doesn’t want to negotiate with the US,” Yang Weimin, a former senior economic and foreign policy adviser to President Xi Jinping, said Sunday, as cited by the Wall Street Journal. He added, however, that Washington should first “show sincerity” in its desire to resolve the trading dispute. “China is not going to negotiate with a gun pointed to its head,” the official noted.

Trump has been locked into a trade dispute with Beijing over China’s policy of forcing US companies to hand over trade secrets as a cost of doing business in China. Both countries have already slapped levies on $50 billion of each other’s exports. Currently, the US imports over half a trillion dollars worth of goods from China every year, while China imports $130 billion from the US.

President Trump defended his mercantilist policy on Monday, tweeting that “Tariffs have put the US in a very strong bargaining position, with Billions of Dollars, and Jobs, flowing into our Country – and yet cost increases have thus far been almost unnoticeable.”

Tariffs have put the U.S. in a very strong bargaining position, with Billions of Dollars, and Jobs, flowing into our Country – and yet cost increases have thus far been almost unnoticeable. If countries will not make fair deals with us, they will be “Tariffed!”

The president, who has also engaged in trade battles with allies in the European Union and Canada then warned: “If countries will not make fair deals with us, they will be ‘Tariffed!’”

For China, Trump announced earlier this month that he has further tariffs on another $260 billion worth of Chinese imports “ready to go.” If all of Trump’s planned tariffs are applied, Monday’s levies, plus the existing $50 billion and planned $260 billion in tariffed goods would cover and exceed all of the US’ imports from China, a staggering $506 billion.