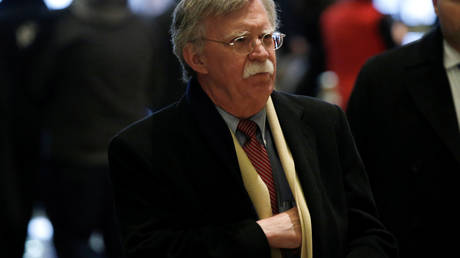 With the Venezuela crisis escalating after the US’ provocative intervention against elected leader Nicolas Maduro last week, an honest admission by National Security Advisor John Bolton was overlooked by the media: It’s about oil.

Trump’s top adviser, who has been branded the most fervent hawk in the administration, has admitted that Washington is heavily invested in political outcomes in Caracas particularly because of Venezuela’s vast untapped oil reserves.

Indeed, it just so happens that Venezuela has the world’s largest proven oil reserves.

The Trump administration isn’t even pretending when you have Bolton literally say it’s about oil. No American can legitimately support this coup. It’s not about anything good. Just theft.

Speaking to Fox Business host Trish Regan, Bolton said that the US had “a lot at stake” in Venezuela’s political crisis, specifically citing the country’s oil and the economic benefit it could bring to the US.

It will make a big difference to the United States economically if we could have American oil companies invest in and produce the oil capabilities in Venezuela.

“We’re in conversation with major American companies now…It would make a difference if we could have American companies produce the oil in Venezuela. It would be good for Venezuela and the people of the United States.” – John “Chickenhawk” Bolton, servant of Swamp King Trump. pic.twitter.com/M8rl8UqAdm

During a separate appearance on Fox Business, Bolton was less explicit, telling host Stuart Varney that getting rid of Maduro was paramount since he was bringing “countries with interests hostile to ours” into the country and ousting him would be a “potential major step forward”  for “business” opportunities in the region.

Of course, Bolton also repeated the usual lines, claiming the US intervention in Venezuela’s domestic politics was about ousting an “authoritarian” leader and protecting democracy and human rights — but the comments about oil betrayed what many have suggested is the underlying reason and driving force behind the White House’s interference.

According to the CIA World Factbook, as of January 1st, 2017 Venezuela had the largest proven oil reserve estimate of any country, including Saudi Arabia. pic.twitter.com/JQ8Uz7S18E

The USA has been destroying Venezuela for its oil, just like Iraq and have started a coup, trying to install their puppet regime under Guiada. The US sanctions are illegal under international law not endorsed by UN Security Council- Former UN Rappoarteur https://t.co/eTniRxdE5M

Venezuela happens and people people fall for the usual auld left versus right crap as an opportunity to bang on about their political prejudices and gallop off on their hobby-horses.

Oil & money & who gets to get it is the reason for this situation, nothing else.

Bolton’s interest in seeing the US economy profit off Venezuela’s plentiful natural resources shouldn’t be much of a surprise. Trump himself has a history of arguing for regime changes in oil-rich countries around the world… but only if US companies benefit.

“I’m interested in Libya if we take the oil. If we don’t take the oil, no interest,”he told Fox in 2012 a month after the disastrous US-led NATO intervention which left Libya a failed state. “We’ll help you, but we want 50 percent of your oil,” he said of Libya in another interview. Trump has also advocated a “take the oil” policy for Iraq in the past.

Trump on Libya in 2011: We should “Immediately go into Libya and knock this guy out… We should’ve said we’ll help you, but we want 50% of your oil.“

Bolton isn’t the only one to admit oil is a primary factor in US actions in Venezuela. Florida’s Republican senator Marco Rubio tweeted last week that refining the much-sought after heavy crude from Venezuela already “supports great jobs” for Americans in the Gulf Coast.

For the sake of these U.S. workers I hope they will begin working with administration of President Guaido & cut off illegitimate Maduro regime.

Despite clear admissions that oil is a primary interest for Trump and Bolton, that aspect of Venezuela’s crisis has been mostly overlooked by mainstream media in the US and Europe, with journalists, who are usually more hostile to Trump, unquestioningly adopting the narrative that the intervention is about “democracy” instead.

Last week, Trump recognized Venezuelan opposition politician Juan Guaido as the country’s interim president, declared Maduro’s presidency “illegitimate” and called for regime change. The European Union, along with US allies in the Western Hemisphere quickly lined up to back Trump’s position, while Russia, China, Turkey and Venezuela’s allies in Latin America spoke out against the move.

Maduro’s government has accused the US of trying to engineer a “coup” and waging an “economic war” against it.