After Israel’s Jerusalem affairs minister called for a million Jewish settlers to occupy the West Bank, the US is reportedly putting Palestine on notice. Its Washington office may be closed unless it enters into serious peace talks with Israel.

Secretary of State Rex Tillerson has determined the Palestinians violated an obscure US law that would make the Palestinian Liberation Organization (PLO) close its office in Washington DC, unnamed US officials told the Associated Press on Friday.

Under the 2015 Consolidated Appropriations Act, the PLO is not allowed to initiate an International Criminal Court (ICC) investigation, or actively support an ICC investigation that “subjects Israeli nationals to an investigation for alleged crimes against Palestinians.”

The Trump administration decided to take action against the PLO after Palestinian President Mahmoud Abbas spoke at the United Nations in September and called on the ICC to open an investigation, and to charge Israeli officials “for their involvement in settlement activities and aggressions against our people.” 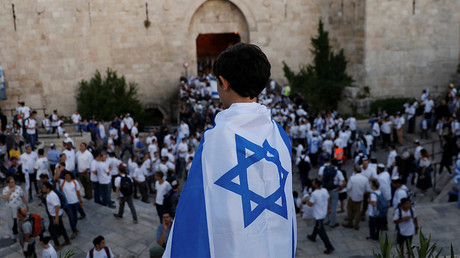 President Donald Trump will have 90 days to decide whether to permanently close the PLO’s office or waive the law if he determines the Palestinians “have entered into direct and meaningful negotiations with Israel.”

A State Department official told Haaretz that the US is “not cutting off relations with the PLO, nor do we intend to stop working with the Palestinian Authority.” The official said: “We remain focused on a comprehensive peace agreement between the Israelis and the Palestinians that will resolve core issues between the parties. This measure should in no way be seen as a signal that the US is backing off those efforts.”

Even if Trump decides to close the office, the official added that the US will continue trying to work out “a comprehensive peace agreement between the Israelis and the Palestinians.” Current efforts to broker a peace deal between Israel and Palestine are being headed up by Trump’s son-in-law and senior aide, Jared Kushner.

Speaking at the “On the Way to a Million” conference in Jerusalem on Tuesday, Israel’s Jerusalem affairs minister, Ze’ev Elkin, dismissed the the idea of a sovereign Palestinian state in the West Bank, using Arabic slang to make his point clearer. “Halas’ [enough] with the story of two states. There is no other option but the state of Israel, certainly between the Jordan [River] to the sea there will be one state,” Elkin said.

Instead, Elkin called on a million Jewish settlers to occupy the West Bank, which he said would require constructing 100,000-120,000 apartments per year, compared with the 2,934 that were built in 2016.

The UN has time and again condemned Israeli settlements in the occupied Palestinian territories as a threat to peace, and repeatedly stressed there is no alternative to the two-state solution, where Israel and Palestine are both recognized as sovereign nations.

After Interpol’s General Assembly voted to make the ‘State of Palestine’ a full-fledged member in September, Israeli Prime Minister Benjamin Netanyahu reportedly demanded the US close the PLO delegation, according to the Times of Israel. PLO Ambassador to the US, Hussam Zomlot, responded with a video on Twitter, calling the demands “absurd.”