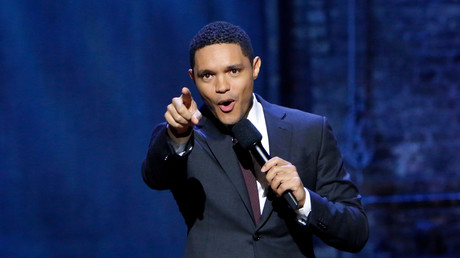 Liberal comedian Trevor Noah is facing a Twitter backlash for an old resurfaced joke about the 2012 Marikana massacre, during which 47 people were shot and killed by police in South Africa during a miners’ strike.

Noah, who hosts the ‘Daily Show’ on Comedy Central, defended the the use of lethal force by the South African police, saying that they “used teargas all week” but “couldn’t control people” and “had to use ammunition because the strikers had weapons.”

During his stand-up set, Noah said that nobody “really knows” what happened, but that “everyone has an opinion” on the event, which was the bloodiest episode in the country’s history since the end of apartheid in 1994. He also joked that “teargas is a waste of time” and ineffective against protesters, asking “Which strike has ever ended because of teargas?”

But the beloved comedian’s comments did not go down well with Twitter, where he was accused of “whitewashing” ‘war crimes’ and defending “state terrorism.”

Here’s @Trevornoah defending the biggest act of state terrorism to occur in South Africa since 1960.

This thread uses clips from Miners Shot Down (2014), a documentary about the Marikana Massacre, in which 47 striking miners were killed. pic.twitter.com/cepmx8Blaa

One tweeter from South Africa lashed out at the mixed-race comedian, saying he “played the colour card” in order to “hit the big time” and win a fan base in the US. “Hope the US dollars are worth this comedy” another user wrote.

Police at the time defended their use of force against the protesters who were calling for pay rises — but post-mortem reports found that most of the people killed were fleeing from police when they were shot in the back.

It was the second time in a week that Noah’s past jokes had come back to haunt him. A joke he made in Australia about how he had “never seen a beautiful Aborigine” woman sparked Twitter outrage and led to an apology from the comedian.

Dear brother @Trevornoah, you’re recognised as a powerful voice for the black people across the world. I’ve been monitoring the debate about the offensive words you’d spoken about Aboriginal women. Man up brother and apologise to your sisters. Sort it out now #AboriginalWomen

@joewilliams_tew you’re right. After visiting Australia’s Bunjilaka museum and learning about aboriginal history first hand I vowed never to make a joke like that again. And I haven’t. I’ll make sure the clip from 2013 is not promoted in any way.