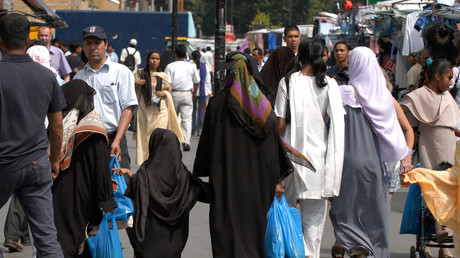 Sharia courts in the UK are discriminating against women according to a Tory MP, speaking at a rowdy PMQs. Philip Davies, MP for Shipley, attacked so-called “noisy feminists” in Parliament for failing to raise the issue.

Following the customary exchange between Prime Minister Theresa May and opposition leader Jeremy Corbyn, Davies rose to speak. “Last year I attend a meeting in the House of Lords organized by the wonderful cross-bench peer, human rights campaigner Baroness Cox,” he said.

“Three very brave women told us their harrowing tales of how they have been treated and discriminated against by Sharia councils.

“It is amazing how noisy feminists in this place are so quiet on these issues when women are being so discriminated so blatantly in this country. Isn’t it time this alternative discriminatory form of justice was no longer tolerated in this country?”

A chorus of moans and jeers rang out in the House of Commons as Davies asked the question to the PM. In response, May, who had called for a review into the issue – published last month – said Home Secretary Amber Rudd would soon be responding to the findings.

Sharia courts make rulings over Muslim marriages and other matters, but they uphold a system which treats men and women differently. In Islam, a man can divorce a woman simply by saying “I divorce you” three times. The triple talaq is used by men only. However, for a woman to divorce a man she must seek approval from a judge and, if she does not have grounds for divorce, she has to waive her ‘Mehr’ – a compulsory financial gift from her husband.

The report into the matter suggested that Muslim couples should undergo a civil marriage as well as a religious ceremony to give women protection under the law. Upon its release, May said Sharia court rulings do not override British law.

“We are very clear there is one rule of law in the UK and that is British law. But he is right and I myself have also heard stories from individual women who have felt they have been discriminated and treated badly by Sharia courts,” she said.

Twitter users were swift to react to Davies’ comments. One man said: “Philip Davies hasn’t clocked that ‘feminists’ in Parliament are only ‘noisy’ when he’s speaking, mostly because they’re telling him to stop being so, well, him… #PMQs”

An aside, I can absolutely assure you that Phillip Davies does not have the interests of the safety of women at heart because we sat in Westminster for 78 minutes as he tried to talk @EilidhWhiteford‘s Bill on the Istanbul Convention out. #PMQs

At PMQs, MP and semi-professional irritant Philip Davies asks about sharia law, and manages to include a dig at “noisy feminists” in parliament. It’s just all so tiresome.

The dreadful Philip Davies, the epitome of a bigot & essence of the Nasty Party..