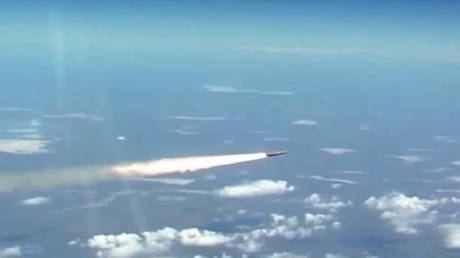 Head of the US Strategic Command cited new Russian hypersonic missiles and other weapons as reason US must invest billions in nuclear modernization, and hinted at scrapping the last remaining arms control treaty with Moscow.

Testifying before the Senate Armed Services Committee on Tuesday, US Air Force General John Hyten said that the new weapons systems unveiled by Russia last year were not covered by the New START arms control treaty, and that the US might have difficulties contending with such weapons in the future.


The head of STRATCOM was referring to the ‘Poseidon’ nuclear-powered underwater drone torpedo, an intercontinental-range cruise missile and a hypersonic nuclear warhead, all of which were unveiled last March by President Vladimir Putin. None of these systems are covered by the arms control treaty negotiated in 2010, which is set to expire in 2021.

“I support New START, but you have to have a partner who wants to participate,” Hyten said, explaining that he would like to see the treaty extended through 2026 and expanded to cover these new weapon systems. “If they won’t do that, that’s part of what we have concerns about.”

Explaining the difference in capabilities between ballistic and hypersonic missiles, Hyten said that the existing US sensors can detect and locate all missiles at launch, the hypersonic missile then “disappears and we don’t see it until the effect is delivered.”

I heard hearing too. Hyten didn’t say Russia was cheating on New START but that they were developing weapons that are outside treaty. He strongly supported the treaty, including extending it, but also said new weapons ought to be brought under control at some point. https://t.co/zuFD0lbW5K

Article V of the New START treaty actually provides a mechanism for parties to raise the question of “a new kind of strategic offensive arm” if they believe it is emerging. There has been no evidence so far that the US has invoked this provision regarding the new Russian weapons.

Instead, Washington has chosen to unilaterally withdraw from the Intermediate-range Nuclear Forces (INF) treaty, signed in 1987 to cool down nuclear tensions in Europe.

Also on rt.com
US withdraws from INF Treaty in 180 days – Pompeo


Part of Hyten’s testimony was spent on laying out the case for spending billions of dollars on modernizing the current US nuclear arsenal, including the “triad” of long-range bombers, ground-based missiles and submarines.

Though government accountants have estimated that the overhaul might cost more than $1 trillion through the 2030s – and House Democrats are now saying this would be too expensive – Hyten insisted that the program was essential.

“Even at the highest rate, it’ll still be roughly 6 percent of the overall defense budget. I think we can afford that security,” he said.