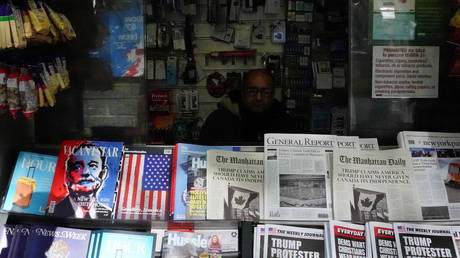 BuzzFeed’s ‘bombshell’ claim last week that Donald Trump told ex-lawyer Michael Cohen to lie to congress is just the latest in a long line of ‘Russiagate’ stories that have later turned out to be false.

But BuzzFeed’s rubbished article is part of a phenomenon of what could be termed ‘acceptable fake news’ — fake news that gets a pass from the media because it serves a certain narrative. In this case, it furthers the ‘Russiagate’ narrative, which the mainstream media has been pushing breathlessly for two years. Lacking hard proof that Trump ‘colluded’ with Russia to win the 2016 election, they have clung to anything shred of fake evidence they can find.

Last week, one astute Twitter user compiled a list of a whopping 42 Russiagate stories which were billed as bombshells but which ended up needing to be retracted or corrected. Here are seven of the most scandalous instances.

I’ll start a thread here to count them (I had started one for a CounterPunch article more than a year ago, but gave up partly because the list just kept growing as I tied to write). So:

When WikiLeaks published the emails belonging to Hillary Clinton aide John Podesta in 2016, MSNBC sought to actively encourage its viewers to believe the emails were doctored by Russia.

They based that spurious claim on the fact that a fake transcript of a Clinton speech to Goldman Sachs was drifting around Twitter. The fake transcript had not been published by WikiLeaks, however. Rather, it was the creation of a pro-Clinton troll who had intended to trick Trump supporters into believing it was real so he could later embarrass them for their gullibility. MSNBC reporters who used the fake Twitter transcript to tarnish WikiLeaks’ authentic documents never corrected their false claims.

In one of the most infamous cases of a botched Russia-related story, the Washington Post claimed that Russia had hacked the Vermont power grid. In its zeal to deliver bombshell proof that Russia was attempting to attack the US, the Post reporters didn’t even bother to contact the utility company which could have told them that there had been no hacking or penetration of the power grid at all The post admitted later in an editor’s note that the story was fake.

It’s not often journalists who publish fake Russia-related ‘bombshells’ face real consequences, but last June, three CNN journalists, including the executive editor of a shiny new ‘investigative’ branch had to resign following the retraction of a false story which claimed Congress was investigating a Russian investment fund “with ties” to Trump’s team. The story quoted a single anonymous source and CNN later admitted that its reporters failed to follow “some standard editorial procedures” before publishing it.

10. A CNN Russia/Trump story based on a single anonymous source had to be retracted and led to the resignation of three CNN journalists. https://t.co/Im5VIrx02U

In a rush to prove that the Trump campaign had advance knowledge of and access to hacked DNC emails published by WikiLeaks, CNN (again) got the date of an email wrong. CNN claimed “multiple” sources had told them the email about the documents had been sent to the Trump campaign on September 4, but in reality, it had been sent on September 14 — a day after the WikiLeaks documents were made public — not, as CNN had claimed, nine days before.

I still think the single worst humiliation was when CNN screamed EXCLUSIVE!!!: Trump Jr. had advanced access to the WikiLeaks archive, & MSNBC’s @KenDilanianNBC claimed he “independently confirmed” this, all based on a wrong email date – they still haven’t explained that. But….

5. ABC’s dud on Michael Flynn and ‘contact’ with Russians

Veteran ABC journalist Brian Ross was suspended after reporting last December that Trump had ordered former adviser Michael Flynn to contact Russian officials during the presidential campaign. It turned out, Trump had made this request of Flynn after he had won the election — not an unusual request for someone about to become the president of the US. Ross left ABC for good a while later after a career littered with embarrassing reporting blunders.

BREAK: ABC has suspended @BrianRoss for 4 weeks without pay for going to air with inaccurate story that said candidate Trump (instead of President-elect Trump) had told Flynn to contact the Russians pic.twitter.com/eanGzSGeYn

MSNBC reported last year that Russia was likely responsible for a supersonic attack on US diplomats stationed in the Cuba embassy. One ‘expert’ appeared on the channel stating that possible Russian “sophisticated microwaves” targeted the diplomats, while a reporter claimed Russian guilt had been “backed up” by interceptions of Russian communications. Meanwhile, intelligence sources told the New Yorker that no such evidence existed. When the Associated Press later released an audio recording, two US scientists deciphered that the sounds the diplomats had heard were more than likely the sounds of a species of Caribbean crickets during mating season.

Remember when the US media credulously repeated the Reagan administration’s claims about Soviet “yellow rain” chemical warfare in Afghanistan & elsewhere? It turned out to be bee crap. Now Americans in Cuba are being attacked by crickets. https://t.co/jNraU3iGa6 by @ggreenwald

WikiLeaks raised more than $55,000 in donations to sue the Guardian after the British newspaper published a story alleging (without corroborated evidence) that Julian Assange had held secret meetings with former Trump campaign manager Paul Manafort at the Ecuadorean embassy in London, where Assange has been living since 2012. The story which WikiLeaks claims is completely false — and which has also been questioned by other journalists — was written by Luke Harding, a Guardian reporter who has been accused before of fabricating stories and who went AWOL after the report was received with serious skepticism.

7/ In less than 48 hours, we went from “MANAFORT SECRETLY MET WITH ASSANGE 3 TIMES IN THE EMBASSY” (Guardian) to “MAYBE THE RUSSIANS TRICKED THE GUARDIAN INTO PUBLISHING A FALSE STORY” (Politico’s CIA writer). Next: why do people not trust news outlets??? It’s so unfair!

Unfortunately, the regularity with which these Russiagate stories have turned out to fake still hasn’t raised any red flags with establishment journalists, who seem more eager to bolster a narrative than to uncover actual facts.