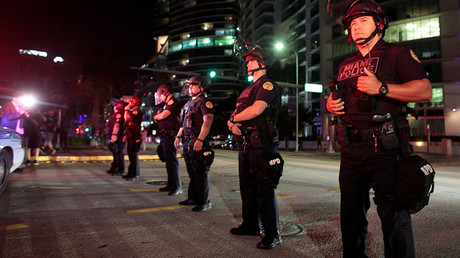 It’s been written there are five people you meet in heaven, but the Federal Emergency Management Agency says there are seven types you meet at a protest, according to their guide for handling crowd dynamics.

The Federal Emergency Management Agency’s (FEMA) guide to protesters offers a unique insight to how law enforcement views people at demonstrations of all kinds, ranging from the ones taking place against the North Dakota Access Pipeline to others across the country against President-elect Donald Trump.

The guide to field force operations was obtained by Unicorn Riot through a Freedom of Information Act request and is available to the public on Muckrock. It describes the various stages of how to cope with protests before making mass arrests. One such tactic is declaring the assembly unlawful from multiple locations in English and other languages.

The crowd control section gives readers an idea of what law enforcement sees when they clash with protesters. According to the guide, there are seven kinds of protesters who range from people who “are always spoiling for a fight and only need a fancied insult or slight provocation to excite them to violence” to “people who do not actively join the mob but who enjoy the show.”

The first kind of protester listed is the bane of many peaceful demonstrators’ causes. Defined as “impulsive,” they’re described as “short-tempered people” who “are the kind who are always spoiling for a fight and only need a fancied insult or slight provocation to excite them to violence or incite others to violence.”

The second is the “suggestible” protesters who “get into the action early and are easily influenced to follow the lead of the more violent.”

Then there are the “cautious” ones. They are “individuals who wait for the cloak of anonymity to give them courage by hiding their identity.”

“Yielders” are a cross between the cautious and the suggestible protesters. They don’t “join the action until a large number of participants give the impression of universality. In other words, ‘Everyone is taking part, so why shouldn’t I?’

Not everyone at a demonstration is a bad boy or girl, though. There are also the “supportive” ones who “do not actively join the mob but who enjoy the show and even shout encouragement.”

One the “resisters” who seem to be the idyllic version of a protester as their “standards of judgment are not swayed by the emotional frenzy of the mob but who maintain level heads. They can disagree with the actions of the majority.”

Finally, the “psychopathic” ones are “individuals with a pathological personality structure,” who are “angry at the world and seek to use a riotous situation as means of getting even with society.”

Its crowd control section describes protest ideologies as ranging from “perceived unfairness around hot-button issues from politics to the economy to race relations to sporting rivalries.” In addition, it uses the Department of Justice’s list of ideologies, “which it refers to as threats,” such as sovereign citizens “considered anti-government extremists” and “covers criminal acts committed in the name of animal rights.”

Overall, the guide is a unique look into how police handle crowd control on a large scale. Given that demonstrations tend to be organized over perceived wrongs, it is understandable that handling a protest in Times Square needs to be handled differently than the crowd at the Macy Thanksgiving Parade. But just as the guide teachers law enforcement about the behavior or protesters, having it readily available can also teach protesters what to expect from law enforcement.