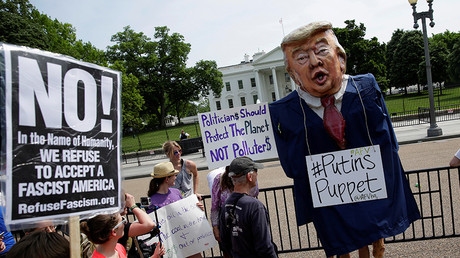 Thousands of people took to the streets in Washington to protest Donald Trump’s stance on climate change. As the US president marked 100 days in office, rallies were also organized in New York and elsewhere across the country.

Some 15,000 people matched from the lawn of the US Capitol to the White House, despite the 90 degrees Fahrenheit heat in Washington, according to estimates by Reuters.

The participants of the Peoples Climate March demanded that Trump, who called climate change a “hoax” during his campaign, to maintain the environmental policies of his predecessor, President Barack Obama.

They carried colorful signs, which read: “Imagine a world free of climate change,” “Planet over profits,” “There is no Planet B” and many others.

As people marched outside the Trump Hotel, they chanted “Shame!” and “We want a leader, not a creepy tweeter,” the Washington Post reported.

The Trump administration said it’s viewing the possibility of withdrawing the US from the Paris Agreement, signed by more than 190 countries to curb global warming. The president also recently spoke about reducing the funding of the Environmental Protection Agency.

The marchers also protested other issues, which included immigration policies and abortion rights, raised during the March of Silence in Washington a week ago.

The rally went on without incidents as protestors opted to make selfies with the police instead of confronting it, the Washington Post said.

The organizers of the People’s Climate March promised that there’ll be around 300 protests across the country on the day, including Boston and San Francisco.

New York has become a venue for both anti- and pro-Trump rallies on Saturday.

“It has been an afternoon of activism here in Manhattan,” RT’s Caleb Maupin reported from the scene as demonstrators gathered outside the International Trump Hotel near the Central Park.

The anti-Trump crowd displayed banners, reading “100 days? I wish this was fake news,” “100 days of bigotry” and others, dedicated to environment, immigration and other matters.

Meanwhile supporters of the president were waving American flags and chanting: “Build the wall,” referring to Trump’s promise to literally fence off the US from Mexico.