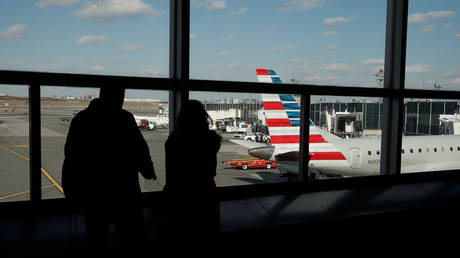 Multiple airlines are recovering from a computer glitch that left thousands of flights delayed and hundreds canceled across the US. Stranded passengers voiced their frustrations on social media.

The outage involved Aerodata, a computer program that records a plane’s weight and balance information necessary to grant clearance for takeoff, according to the Federal Aviation Administration. Without the computer-generated paperwork, planes stayed grounded across the country early on Monday morning.

AeroData is currently experiencing a technical issue that is impacting multiple carriers. We appreciate your patience during the wait.

Grounded passengers tweeted their frustrations at the airlines.

@Delta flight DL 6210 to Detroit says delayed until 7am…has the tech issue been resolved, or is my app going to tell me it’s been delayed again even further? 😡

Got to the airport at 5am. have been sitting on this @SouthwestAir flight for an hour now. All flights grounded across the country due to system outages. I wish this was an April fools’ joke. Send positive vibes. pic.twitter.com/sOPQvz9n2X

Seriously @delta – your regional carrier computer glitch won’t let us shut the door to the jet bridge and thus we will be delayed an hour and a half. Happy Monday

The glitch was later resolved, but lingering delays are expected as the airlines resume normal operations.

The outage comes a week after technical issues with Sabre, a company handling ticketing and reservations for at least 300 airlines and 100 airports, forced multiple carriers to delay flights as staff manually checked in passengers.