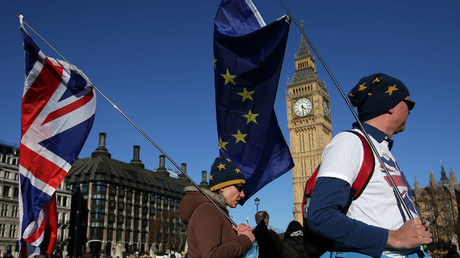 Thousands of protesters took to the streets of London in a “Unite for Europe” march to protest Britain leaving the EU.

Waving the blue-and-yellow EU flags, demonstrators gathered at Park Lane in central London at around 11am on Saturday before marching to Parliament Square, where a mass rally took place.

The march was organized by Unite for Europe, which describes itself as “a national umbrella group of Remain campaigners.”

READ MORE: ‘No to racism’: Around 30K take part in London march against discrimination (VIDEO)

“We are the 48 percent who voted against Brexit and those who were not allowed to vote against it – the young and the EU nationals living, working and paying taxes in the UK. We are outraged by the government’s current direction in dealing with the result of the referendum,” reads the description on the event’s website.

Between 25,000 and 100,000 people attended the march, according to the London Evening Standard. Among them were members of “The Three Million,” a group which supports the rights of EU citizens living in the UK.

Security in London had been heightened since the Westminster terrorist attack on Wednesday, and the Metropolitan Police announced that extra officers had been put on duty.

In Central #London today there will be additional Police officers on duty for security and reassurance.

A minute’s silence was observed on Parliament Square for the four people killed in Wednesday’s attack, and some people took the opportunity to leave flowers at the site.

Prime Minister Theresa May is expected to trigger Article 50 of the treaty on the European Union on Wednesday, formally beginning negotiations to exit the 28-nation bloc that are expected to last two years. The decision to leave the EU, or Brexit, was made after a referendum of June 23 last year following a heated public campaign.

The march in London was held on the 60th anniversary of the Treaty of Rome, signed in 1957 by six countries – Belgium, France, Italy, Luxembourg, West Germany and the Netherlands – setting up the European Economic Community (EEC), which later gave rise to the European Union in 1991. In the Italian capital, however, thousands of protesters have taken to the streets to rally against the EU.