Janine Jackson interviewed Maha Hilal about CIA torturer Gina Haspel for the March 16, 2018, episode of CounterSpin. This is a lightly edited transcript. 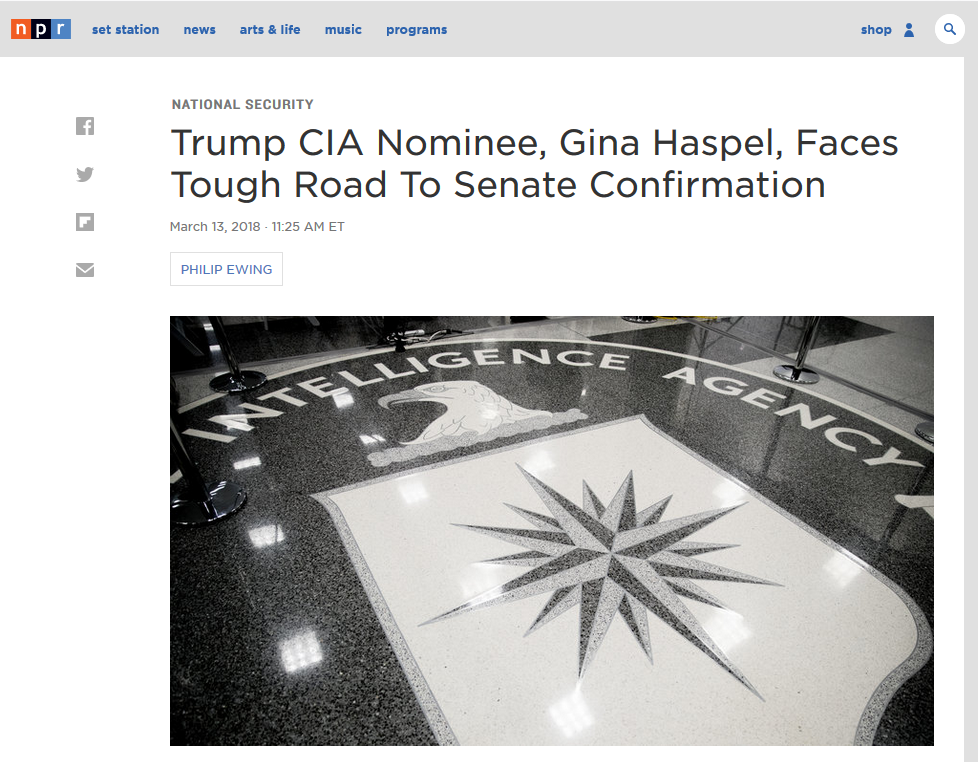 Janine Jackson: Because this is the way things are now, the country’s secretary of State, Rex Tillerson, was fired via Twitter this week. Tillerson is to be replaced by current CIA Director Mike Pompeo, and Pompeo’s top spot may be taken by the current deputy director, Gina Haspel.

Most people won’t recognize the name, but human rights advocates know Gina Haspel well as chief of base of a secret prison in Thailand, called Cat’s Eye, where a man suspected of being in Al Qaeda was brutally tortured, including being waterboarded 83 times and hung by hooks from the ceiling. Questions are being raised about Haspel’s precise role in the torture, about whether her views have changed. But from a president who has declared support for “a hell of a lot worse than waterboarding,” the nomination of someone deeply involved in the rendition, detention and interrogation programs that shocked the conscience as they violated the law is deeply worrying.

Maha Hilal is the inaugural Michael Ratner fellow at the Institute for Policy Studies and an organizer with Witness Against Torture. She also works with the DC Justice for Muslims Coalition, and is a co-principal Investigator with the Torture Treatment Initiative out of Tulane University’s Traumatology Institute. She joins us now by phone. Welcome to CounterSpin, Maha Hilal.

JJ: Let me just ask you what your first thought was on hearing that Gina Haspel might be the new head of the CIA?

MH: Honestly, my first thought is really about the idea that in this country, and particularly in the course of the “War on Terror,” those who have committed the crime of torture—or who have overseen torture, or endorsed torture—actually get promoted, not demoted or prosecuted.

JJ: And, in Haspel’s case, as I say, I’m hearing folks say, “Well, maybe she just oversaw it.” But what do we know about her involvement in what anyone would call torture?

MH: She played a pretty direct role in the CIA’s extraordinary rendition program, and she’s alleged to have overseen, specifically, the violent interrogations of Abu Zubaydah and [Abd al-Rahim] al-Nashiri. So it seems pretty clear that, while we don’t have all the evidence, that she did play a pretty big and direct role in the torture that happened in many of the CIA black sites. 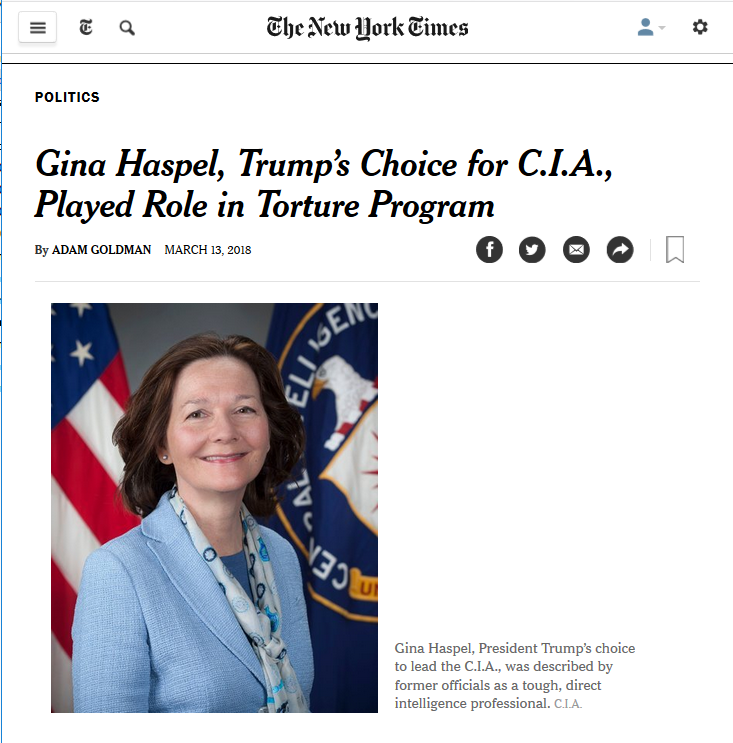 JJ: The New York Times is talking about how Haspel’s nomination will “reignite the wrenching debate” over interrogation “techniques,” like waterboarding, confinement in boxes and sleep deprivation. First of all, it sounds like those being hurt are the ones who have to debate the issue, you know, or look at the photographs, rather than the people who were and who may be tortured.

But also, torture is illegal, isn’t it, even if you label it “enhanced interrogation”?

MH: It is illegal, and it’s important to keep the context of torture, with respect to the “War on Terror,” where under the Bush administration, there was a series of torture memos that essentially said that in order for abuse to rise to the level of torture, it had to result in organ failure or death. That’s a pretty high threshold.

Under Obama, there was presumably an understanding that torture had been outlawed. However, there were still many indications that torture was still occurring. And the fact of the matter is, so long as there’s no accountability for torture, I don’t think that it really matters that much what the discourse is.

And I think that it’s particularly important, not just because of what has happened, but because of this narrative that “this is not who we are.” So it’s really treated as if it’s this exceptional kind of abuse that we’ve continue to use in the course of the “War on Terror,” as if it’s something new. And the fact that it’s not new is precisely why many of these narratives will continue to actually make no difference whatsoever in terms of whether or not torture continues to be a tactic.

JJ: Well, I think that’s a very interesting point, and I would say that pertains also to the narrative around legality, because the idea that the United States doesn’t do things that are illegal, and that you can’t participate in sort of a serious policy conversation unless you buy that, really distorts the whole conversation.

MH: Absolutely. I think we’ve seen throughout the “War on Terror,” that legality as a concept is very malleable. So what do you do when something is illegal? You make it legal. You find a way. You write a series of memos. You change the law. Whatever you want to do. Because, again, there’s no accountability whatsoever, and so it becomes easier to basically make the law cater to whatever abusive policies you want to continue or perpetuate.

JJ: Haspel, we know, was also part of the 2005 plan, under Jose Rodriguez, the head of the CIA’s clandestine service, to destroy video tapes of waterboarding, which also indicates something about transparency at the agency. The New York Times quoted former officers saying that she was “a strong advocate for getting rid of the tapes.” We hope that–you know, often we put reporters in a role that is not the one that they actually play, but coming down on the side of transparency from government agencies seems like a pretty low bar, and Haspel’s record would suggest that she deserves extra scrutiny in that regard. 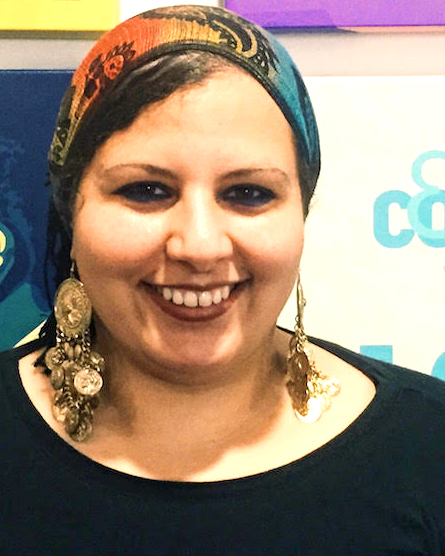 Maha Hilal: “Is there going to be a conversation about what the CIA, as an institution, what kind of crimes it has allowed the US government to commit?”

MH: Right, and I think that there’s an additional point here. One is, you know, we can talk about Haspel’s nomination specifically. But we also have to have the conversation of what the CIA, as an institution, has been designed to do. There are many levels of a lack of accountability. So not only will there probably be no accountability whatsoever for Haspel, and she may very well be nominated and assume the position of leadership. But once that happens, is there going to be a conversation about what the CIA, as an institution, what kind of crimes it has allowed the US government to commit?

I think there has to be a larger conversation, because this is not just about that one person; this is a systemic issue that we fail to address time and time again. And even the way that the CIA has been talked about in many of these circles, it’s as if it’s this very admirable institution that has, you know, all it has done is sought to preserve America’s national security. It has also destroyed many lives around the world, including the Muslim victims of the CIA black sites.

JJ: To me, when media stopped putting the expression “War on Terror” in quotation marks, something was really lost, you know? Because that term is just a tool, that is an instrument that is used very selectively. And the US has never sought to find and prosecute “terrorists,” per se. It really has only been certain people that are targeted. And I hear you saying, we can’t lose sight, as we talk about Gina Haspel being this person, being head of the CIA, and what her particular role in torture was, we can’t lose sight of how it fits into an ideological campaign of hatred and fear. It’s not really about protecting the country.

MH: Right. And I think if you ask any one of the Muslim victims who’ve been tortured, presumably they would not think that what they endured had anything to do with US national security. And I want to just really emphasize this point, because many of the discussions—or at least most of the discussions that I’ve observed—on Haspel’s nomination have made no mention of the fact that every single victim of the CIA’s black sites has been Muslim. And that point has gone extremely unnoticed and under-emphasized.

And I think that that’s a very critical point because, in my opinion—and based on the work and the research that I have done—the reason why the torture has been allowed to be so egregious is because of the way Muslims have been so dehumanized in the “war on terror.” I can’t imagine this happening to a group of, for example, white Christians. There would be outrage, there would be a lot more outrage, than if it’s happening to non-white Muslims across the globe, and in Guantanamo Bay, which, as we know, is an institution where torture has happened, and could very well be happening at present.

JJ: We’ve been speaking with Maha Hilal. She’s the Michael Ratner fellow at the Institute for Policy Studies. They’re online at ips-dc.org. Maha Hilal, thank you very much for joining us this week on CounterSpin.