Janine Jackson interviewed Maha Hilal for the July 27, 2018, episode of CounterSpin. This is a lightly edited transcript. 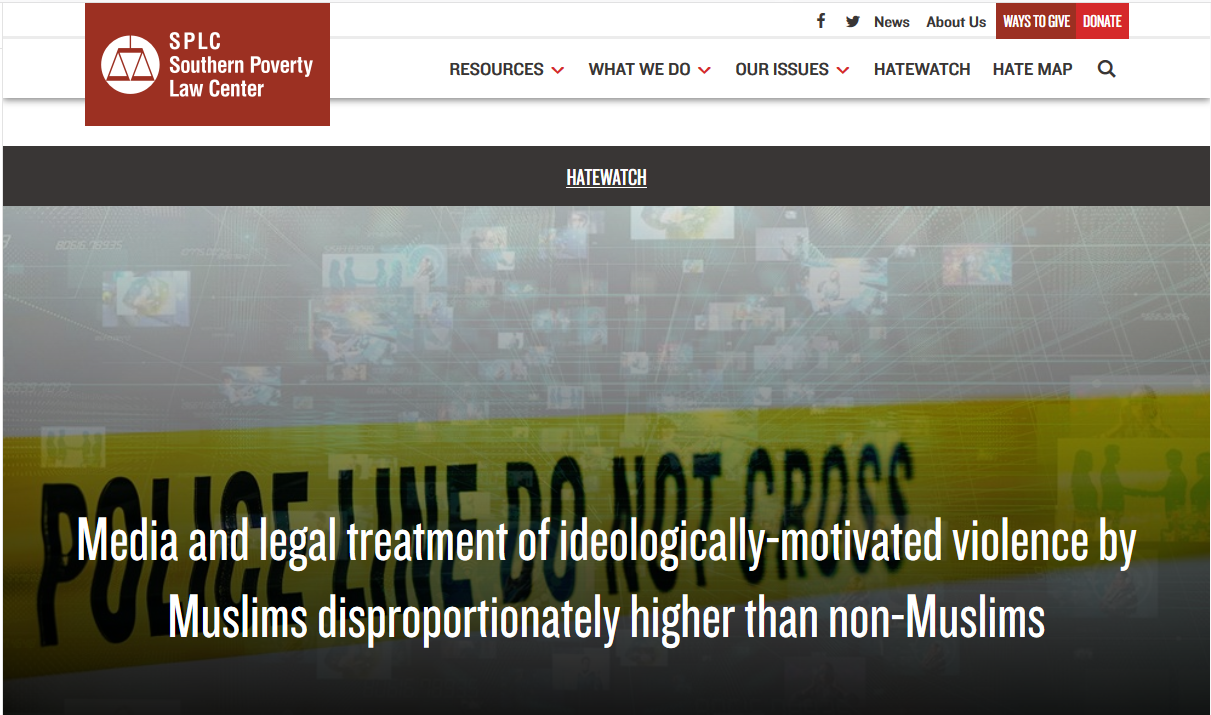 Janine Jackson: Anti-Muslim hatred, assaults, intimidation, vandalism have increased in this country since September 11, 2001, with investigation dishearteningly suggesting the sharpest spikes have been since 2015.

It’s hard now to even measure what has been lost and willfully surrendered in the so-called “War on Terror.” One way is to look at Guantánamo Bay, where hundreds of Muslim men and boys were held and dozens remain, subject to torture, most never even charged with a crime.

Just as Guantánamo is not just a prison but a representation of state violence and lawlessness, sometimes an incident, as one reported recently by our next guest, can represent the intersecting layers of injustice that make up Islamophobia. Maha Hilal is co-director of Justice for Muslims Collective and an organizer with Witness Against Torture. She joins us now by phone from Arlington. Welcome back to CounterSpin, Maha Hilal.

Maha Hilal: Thank you so much, Janine.

JJ: I would just ask you, if you would, to tell the story of July 11, when you went to the US District Court in DC. Why were you there, first of all, and what happened? 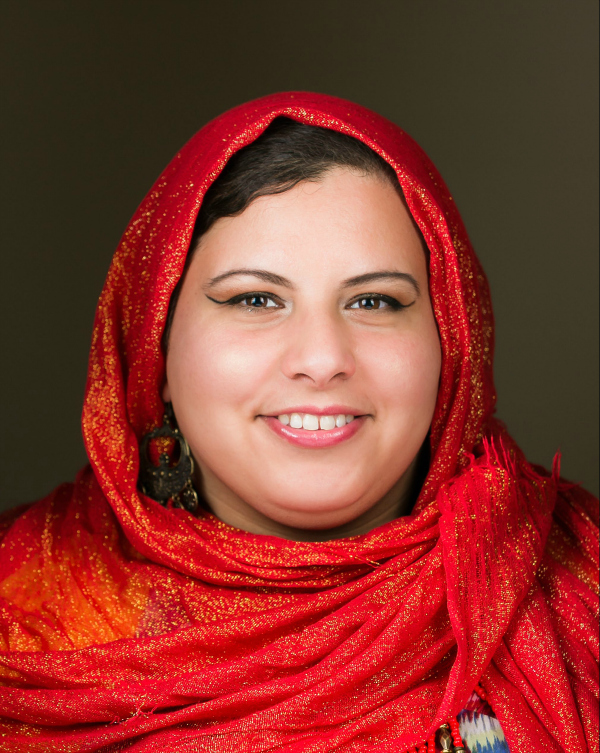 Maha Hilal: “When there is that much discretion, it means that you can use your discretion on people you don’t like, right? And…those who you deem as ‘not following the rules’ typically tend to be people of color.”

MH: Yes, so I went to the court on the morning of July 11, intending to hear the oral arguments in  Al Bihani v. Trump, a case that’s based on the indefinite detention of 11 prisoners in Guantánamo Bay. And as you know, and probably as many of your viewers know, there has been very little justice for prisoners of Guantánamo, particularly those who have remained in detention for over a decade now. So I was pretty excited about this, the oral arguments, and to really think about what justice could look like, and perhaps if justice would come to the prisoners.

And as a visible Muslim woman, I recognized that in many of these settings, when I go into a space that’s national security, that I inevitably invite scrutiny, and oftentimes surveillance as well.

So I went into the courtroom, and I sat in the first row. And after doing so, the officer—his name is Officer Collins—came and told me that I needed to sit in the second row, because the first row was reserved for attorneys. So I sat in the second row, and I had my phone out on my notebook, but I wasn’t actively using the phone. He then approached me and told me I needed to put it away, which I did. But I think I was visibly annoyed when he made that request to me, but more so because of the context that I was in, and being really anxious about the oral arguments that were about to happen.

He then told me that I needed to follow him outside of the courtroom, so I did. And he told me that when he gives me an order, I need to listen to him and not give him attitude, and then said that I was done for the day. And at that point I was sort of in shock, because I really didn’t understand what behavior I had exhibited that would warrant this kind of treatment. It’s not like I got up in the middle of the hearing and disrupted. I didn’t make any noise. The only thing that I had done was to have an annoyed facial expression.

And for me, standing there outside the courtroom, thinking about, I was literally kicked out because I had a facial expression that this officer didn’t like, and what does that mean for the amount of discretion these individuals have to pursue these rules? When there is that much discretion, it means that you can use your discretion on people you don’t like, right? And it means that those who you deem as “not following the rules” typically tend to be people of color. So for me, that was a shock, and also the fact that the officer was a person of color as well, and not recognizing the many layers of irony in this situation. 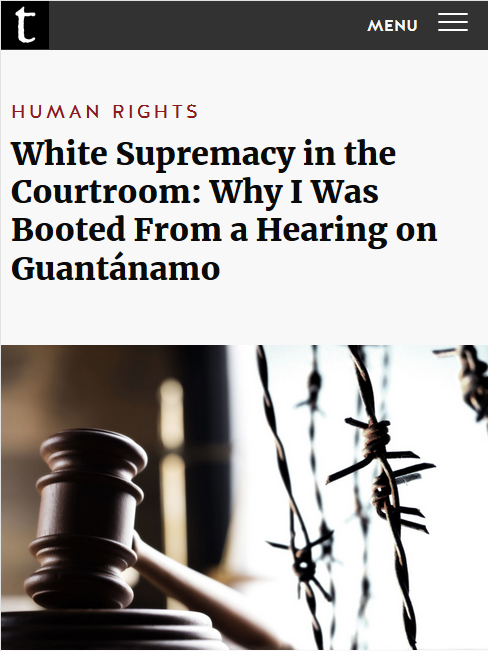 JJ: It pulls on so many different threads, which is why I’m guessing you wrote this essay for TruthOut, “White Supremacy in the Courtroom.” So many things are happening. There is the disjunct that’s just hard to bear, between your being charged and thrown out for the offense of giving attitude in this space where such immense inhumanity is present. You know, this is a case about Guantánamo Bay. I mean, that disjunct is painful.

MH: Yes, it was very painful. It was just, again, the irony, and knowing what was being heard in the courtroom that day. And it has been suggested to me that perhaps he wasn’t aware of what the hearing was, and I find that hard to believe, simply because of the fact that many of these issues that are heard in this court often invite scrutiny, in terms of  protesting. So I would assume that officers who are placed in courtrooms where there might be some sort of protest would be informed of the content of the hearing.

JJ: Absolutely. And then there is the feeling, that is so common for some of us, of selective enforcement, of being singled out. And people always want to say, “But you can’t prove that they picked you because you’re black”—for example. “You can’t, even though everyone was talking and you were the one they said was loud, you know, you can’t prove it.” And it’s just such a common, daily feeling for some of us, as we move through the world, of being looked at a certain way, of being singled out, and particularly in situations where it’s up against officialdom, official power, which always has a latent violence behind it. There always is when an officer yanks you out somewhere; it’s hard not to feel the power disjunct between the two of you.

MH: Yes, and I take a broader approach. The point of a lot of the ways that Muslims have been targeted is not just to target those specific individuals. It’s to send a message to the entire community that you, too, could be targeted; that you, too, will be surveilled; that you, too, will be profiled. So it’s very frustrating when they then turn around and do that, and act as if you’re the one that doesn’t know what’s happening. And we know exactly what’s happening, right? Those who are being targeted repeatedly and constantly know exactly what the state’s agenda has been and is, and that’s because that’s what they have done time and time and time again. 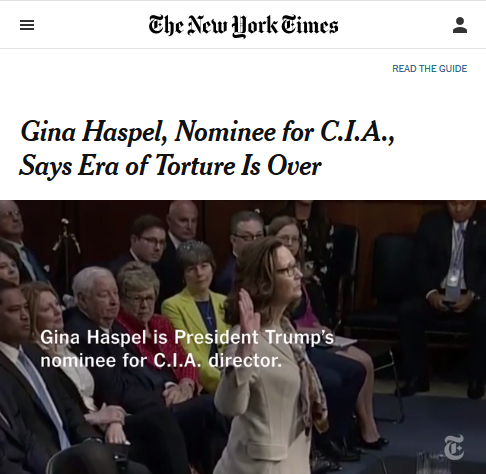 JJ: When we last spoke with you, back in March, we were talking about Gina Haspel possibly being made head of the CIA. And then a few months later, in her confirmation hearing, we see a big New York Times headline, “Gina Haspel, Nominee for CIA, Says Era of Torture Is Over.” She talked about the interrogation program casting “a shadow over what has been a major contribution to protecting this country,” and it reminded me of something you said back in March, which was that there’s not much point in having a debate about Gina Haspel, about her personal relationship to torture or her moral compass, that we have to be having the bigger conversation about the CIA itself.

MH: Yes, absolutely, and I think one of the points that I kept reiterating in that discussion is, there was this argument that was actually used on the left/progressive side, that “she’s not qualified to lead the CIA.” But that ignores the whole entire history of the CIA. The CIA is a brutal institution of state violence. So in that way, she is very qualified to lead this organization.

And it’s very frustrating to be at this juncture in time, when there is a lot of information, a lot of historical information, where we know what these institutions have been responsible for, right? The thing that I like to link it to now, now that this has come about, is the movement to abolish ICE. And I think that that is a very powerful statement, because we are acknowledging the reality that some institutions were designed to inflict massive state violence on to communities. So if we want to think about what it’s going to take to stop that violence, it’s not going to be about reforming these organizations. It’s going to be about dismantling these organizations. And so I think that we have to be really critical about—especially from people of color—what are we asking for, and what are the ways that we’re actually going to get justice? And if similar institutions are going to continue to exist, that’s not going to happen.

JJ: Let me just ask you, finally, I’m very sorry that you didn’t get to be in the courtroom for those oral arguments. What should we know about Al Bihani v. Trump going forward? Because, for reasons that we’ve only touched on, there isn’t going to be, maybe, the scrutiny on it that there should be. But what’s going on there with that case?

MH: Well, it’s interesting, because, on the side of the lawyers who are defending the prisoners, the argument is that you can’t indefinitely detain people, right? There has to be an end to this nebulous war. On the government’s side, their argument was that you can continually detain people as long as this war lasts, even if it’s a hundred years, and there is no set deadline for when this might happen.

And I think one of the problems here, when you’re talking about the legal system post-9/11, which is the context that I am in my research and writing, is that a lot of time you’re not, at the end of the day, actually talking about legality and illegality. You’re talking about who has the power to enforce the set of rules and laws, right? So what you have is people making very legitimate sound arguments, but because the legal system is steeped in white supremacy, racism, anti-blackness, Islamophobia, xenophobia, it becomes less about what the law actually is—and especially when you can just rewrite the law, as we saw with the torture memo, for example—so it becomes less about what the law actually is, and [more] who has the power to enforce these very brutal, oppressive systems.

JJ: We’ve been speaking with Maha Hilal, co-director of the Justice for Muslims Collective and an organizer with Witness Against Torture. Her essay, “White Supremacy in the Courtroom: Why I Was Booted From a Hearing on Guantánamo,” can be found on TruthOut.org. Maha Hilal, thank you so much for joining us this week on CounterSpin.

MH: Thank you so much, Janine.