Janine Jackson interviewed Shireen Al-Adeimi about the Yemen crisis for the December 1, 2017, episode of CounterSpin. This is a lightly edited transcript.

Janine Jackson: The enormity of the humanitarian crisis in Yemen is staggering. At least 10,000 people have died in the last two years of Saudi war in the country, already among the poorest in the region. The UN says Yemen faces the worst famine the world has seen for decades, with at least 7 million people in need of immediate food aid. More than a half million children suffer from severe acute malnutrition, and millions more lack access to any healthcare at all. This while Yemen faces an outbreak of cholera that’s being called possibly the worst in history.

Yet Americans have heard little about what’s happening in Yemen, and still less about how it relates to us. Shireen Al-Adeimi is a doctoral candidate and instructor at Harvard University, working to bring attention to the crisis. She joins us now by phone. Welcome to CounterSpin, Shireen Al-Adeimi.

Shireen Al-Adeimi: Thanks for having me. 60 Minutes‘ Scott Pelley (11/19/17) introduces a report on the humanitarian crisis in Yemen–without mentioning the US role in the conflict.

JJ: It has been noted that US media are doing really very little, particularly television, on the ongoing disaster in Yemen. One outlet that did, CBS’s 60 Minutes, reported compellingly, and under difficult journalistic conditions, about the famine and the bombing victims, and they indicated the Saudis as aggressors. But despite being a US program aimed at a US audience, 60 Minutes said not one word about US involvement, leaving the impression of a regional conflict, fitted into this familiar, reductive “Sunni versus Shia” framework. What would you have Americans understand about this country’s role in the Yemen crisis?

SAA: Thanks for bringing up the CBS report, because that was a huge disappointment. It was just one opportunity for a mainstream audience in the US to learn, for the first time, perhaps, what is going on in Yemen, and what our role is especially. But it was quickly, like you said, characterized as a Sunni/Shia conflict, which is far from the truth. And not once was it mentioned that the US is, in fact, very much involved in Yemen, and has been from the onset of the war.

So when the Saudis decided to attack Yemen in March 2015, the Americans, under Obama’s administration, were right there along with them in the command room, helping them with targeting practice, helping them with logistics and training. The US military refuels Saudi jets midair as they’re bombing. And so we have been heavily involved, we’ve continued to be involved under Trump’s administration, and this is, of course, in addition to the billions in weapons sales that have occurred over the past couple of years.

JJ: There also is the role that the US plays in shielding Saudi Arabia at the UN, isn’t there?

SAA: Exactly. Over and over, the UN has failed to really take any decisive stance against Saudi Arabia. In fact, there have been some really outrageous moves. For example, they’ve been allowed to investigate their own crimes in Yemen, and of course they come out, months later, saying that they were cleared. So it’s just been an absurd game that they’re playing in the UN, and people’s lives are at stake here. And we’ve been shielding them from any independent investigation.

JJ: The latest headlines are about an easing of the Saudi blockade, with some food and vaccines coming through, but we’re told not really to take that as a sign of real easing of the hardship there.

SAA: Not at all. So it’s trickling in; whatever aid is coming right now is trickling in. And like you mentioned, 7 million people are in desperate need of that aid. You know, they need it immediately. But then you also have 20 million people who need food who can’t afford what little food remains in the country. And so we don’t only need aid coming in, but we need trade. And in fact we can’t be begging the Saudi-led coalition to make these positions and [allow them] to hold an entire country hostage and to use starvation as a war tactic. In fact, we should be demanding that they end this intervention in Yemen, so that people can go back to their lives, and try to rebuild and deal with their internal conflicts. 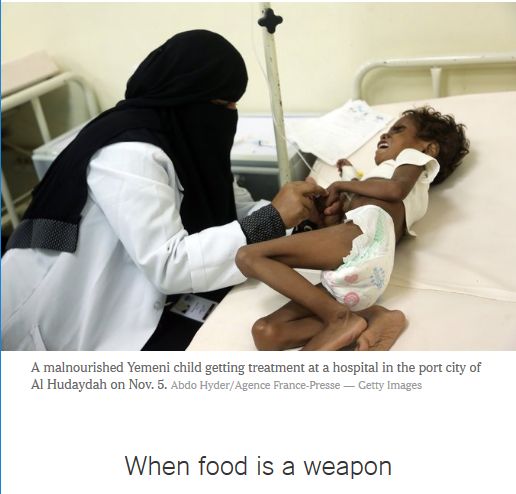 JJ: The New York Times had a piece on November 22 that talked about how this isn’t any sort of natural disaster. It used the phrases “when food is a weapon,” “when disease is no accident,” and “when civilians are targeted.” And it even noted:

United Nations experts have warned that some of the actions carried out by the warring parties, the Saudi-led coalition and the Iran-backed Houthi rebels, could amount to crimes against humanity because of their systematic and widespread execution.

Still, that seems to me to be, at most, talking about the US pressing the Saudis, and not about US citizens pressing their own lawmakers here.

SAA: Exactly. This is presented as an equivalent war between Saudi Arabia and Iran, and again it couldn’t be further from the truth. There’s very little evidence that Iran is involved at all in Yemen. And the way Yemenis see it is that this is very much a US/Saudi war on Yemen, with the help of other regional powers. And so to characterize this as something that’s just happening over there in a foreign land, and we’re trying to put an end to it, that’s really not the case. We are at the center of this, and if our citizens don’t really know our involvement, then there’s no hope for us to be politically involved to try to push our elected officials to do something about our role in Yemen.

JJ: We have of course Donald Trump bragging about $110 billion of arm sales to Saudi Arabia, which the best thing you can say is that he’s probably lying about that amount. But at the same time, the House of Representatives, they passed this resolution stating that US military assistance to Saudi Arabia in the war in Yemen is not authorized under this authorization for use of military force, this post-9/11 legislation. Now, it’s nonbinding, it doesn’t actually stop the support, but it does acknowledge the US role. How meaningful do you think that resolution is?

SA: So the problem with that resolution is that it was a compromise resolution. The previous resolution was House Concurrent Resolution 81, which actually called for the US to stop helping Saudi Arabia in any way, shape or form. And that was proposed by Congressman Ro Khanna in California. Basically he had invoked the War Powers Resolution, which meant that it had to go to vote, and they had to debate it in the House. But it was quickly stripped of its privileged status, and they had to negotiate this compromise bill that was, like you said, nonbinding. And, yes, it acknowledged that this war is unauthorized, but it doesn’t mean anything for US involvement in Yemen; nothing changes. We continue helping the Saudis without any repercussions.

JJ: And am I right that there is nothing in the Senate that’s comparable?

SA: There’s nothing in the Senate right now. There are a couple of senators who’ve been vocal against this, so Sen. Chris Murphy, for example. We need senators to introduce legislation that would extricate the US from the war on Yemen. 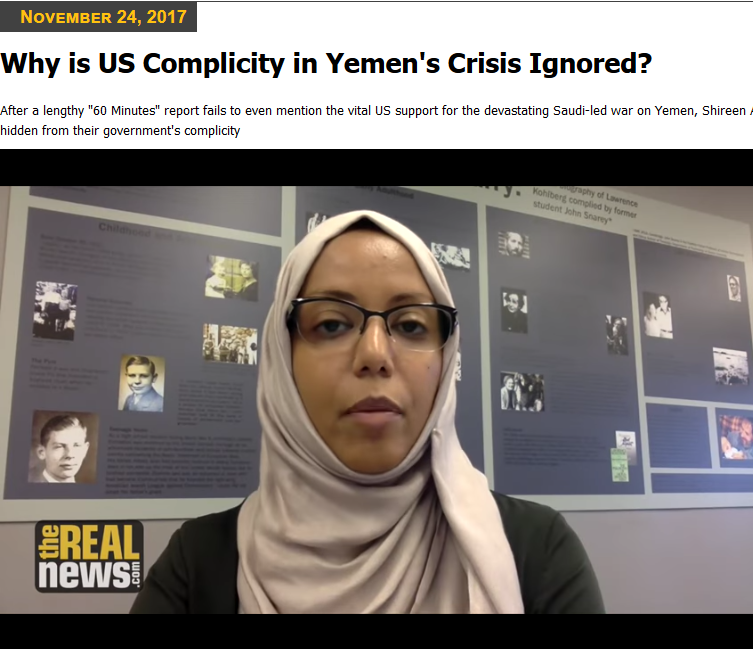 JJ: I read some of the comments after your appearance on the Real News, and one of them said, well, yes, you’ve outlined the suffering in Yemen, but what about the root causes? And what I hear in that is a suggestion that there could be some political or strategic consideration that would somehow make 7 million starving people make sense.

SA: Of course the US has interests in the region. Yemen is at a strategic location at the Red Sea and it’s at the Bab al Mandab Strait, and there’s some oil barrels that go through there every day; not many in the grand scheme of things, but still, the US has interests there. And Saudi Arabia, of course, has always wanted to maintain control in Yemen, and they’ve been involved in Yemen’s various wars and internal politics over the years.

But this comes down to this alliance between Saudi Arabia and the United States that we refuse to even reconsider given the tremendous humanitarian impact in Yemen. This is not just, as I think the Saudis had imagined, a war that was going to end in a couple of weeks, where they were going to come bomb, and leave, and things were going to go back to normal for them. They didn’t anticipate that this was going to drag on for two years and eight months now.

So we should be reconsidering our help with the Saudis. We’re not just selling weapons; like you said, we’re so involved in many ways. And every ten minutes, a child is dying, 130 children are dying every single day. Sixty-three thousand children died last year, 50,000 more died this year. So the numbers are incredible, and the suffering is just horrendous. At what point do we stop and say, well, maybe we should reconsider this alliance, because it’s not helping anyone? 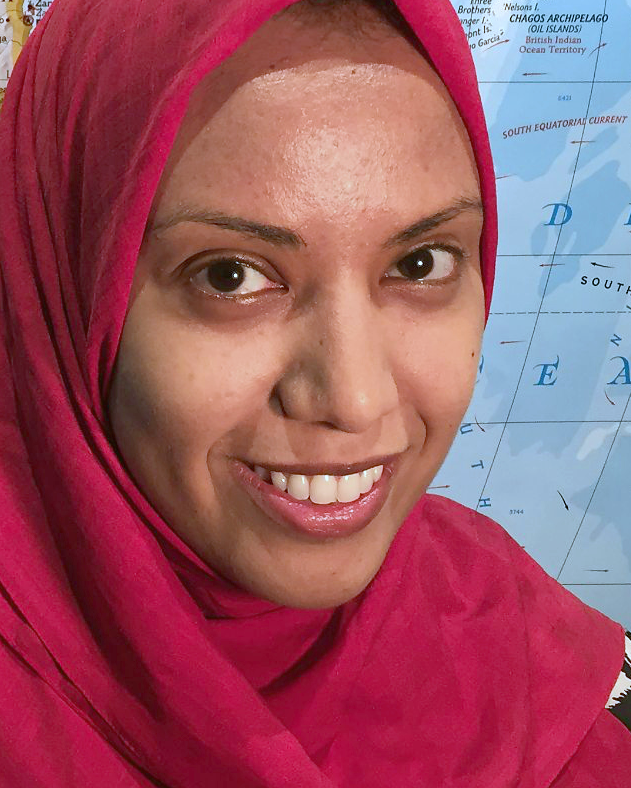 Shireen Al-Adeimi: “We’re not asking for intervention. We’re asking for them to stop this intervention, to remove themselves from this conflict.” (Image: BBC)

JJ: To the extent that that 60 Minutes segment referenced a US role, it was by spotlighting the American who heads the UN’s World Food Program. So if anything, we’re sort of the heroes of the piece. I have a concern that even as headlines come in about people dying, about cholera, that Americans will then talk about the need for the US to “take action,” you know, as if we weren’t taking action now. So to be clear, if the US were to cut off the refueling and the targeting aid and the shielding at the UN, it would change the situation here?

SA: Absolutely. Yemenis are not asking the US to come and save them from Saudi Arabia. We have to be very clear about that. We’re not asking for intervention. We’re asking for them to stop this intervention, to remove themselves from this conflict, to stop interfering in the politics of Yemen and causing this egregious humanitarian suffering by helping the Saudis at all these levels.

And so if the US were to stop, like you said, refueling, shielding the UN—there are even reports that they’re helping impose the blockade—if we stop all of this, then there’s no way that the Saudis can continue this war much longer, because they’re so incredibly dependent on the US’s support.

JJ: So if people are looking for something to do right now, in response to this information, what would you recommend?

SA: I’d recommend that people call their senators and their congressmen, email them, visit their local offices, and really urge them to introduce or support legislation like House Concurrent Resolution 81, that really pushes the US to stop its support of the Saudi Arabians in their war against Yemen.

JJ: We’ve been speaking with Shireen Al-Adeimi. Her October article, “Only Americans Can Stop America’s War on Yemen,” can be found on Common Dreams. Shireen Al-Adeimi, thank you very much for joining us this week on CounterSpin.

SA: Thank you so much for having me.