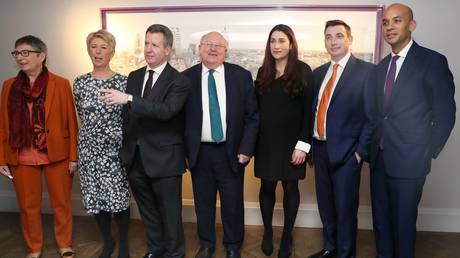 George Galloway claims the seven Labour MPs who have resigned from the party are motivated by a desire to thwart a Corbyn-led government, insisting such a move will only benefit the Tories, in an interview for RT.

Galloway, who was a Labour MP for 16 years, was reacting to the announcements made by several Labour parliamentarians that they are quitting the party to become Independents, having lost trust in leader Jeremy Corbyn over the issues of Brexit, foreign affairs and anti-Semitism.

The former London mayoral candidate told RT that the new grouping of centrist MPs have little chance of success but have big money supporting them. He believes that a certain British electorate that is looking for fundamental socio-economic changes to Britain will not be taken in by this new centrist group, because they represent the ‘status quo’.

“Electorally they will only serve the Conservative Party, because they have very little chance of being elected amongst a public which is sick of the prevailing orthodoxy,” Galloway told RT.

The veteran socialist firebrand claims the MPs, which include prominent ‘People’s Vote’ advocate Chuka Umunna, are not driven by a desire to become electable, but instead destroy any chances of Corbyn becoming PM.

The point for the backers is to wreck Labour’s chances of being elected and wreck Jeremy Corbyn’s chance of being Britain’s Prime Minister.

All of the MPs gave their own personal reasons for quitting Labour, which included Corbyn’s position on various foreign affairs issues such as his alleged hostility to NATO and supposed over-closeness to Russia.

On this, Galloway suggested, “They implied that Mr Corbyn is an agent of Russia. They attacked implicitly his opposition to Israel. These are all very familiar tropes and they don’t just exist in Britain.”

He added that British citizens suffering from poverty don’t care enough about topics such as NATO and Russia to cut through, and instead want a government that can improve their lives.

Galloway has revealed (via an online video on social media) that he has officially asked to be readmitted into the Labour Party – having been expelled under Tony Blair’s New Labour government.

On MP claims that Corbyn’s Labour is now rife with anti-Semitism, Journalist and RT contributor Neil Clark argues that such grievances are not genuine. He claims this was clearly shown in data released by Labour’s general secretary last week, and suggested Corbyn’s pro-Palestinian stance was the overriding issue for many of these MPs.

Many of these MPs are members of the Labour Friends of Israel grouping. Labour doesn’t have an anti-Semitism problem… the number of complaints made against Labour members of anti-Semitism is incredibly small.

Clark argues that the Blairite MPs want to sabotage Corbyn and are not driven by a desire to change British politics for the better, as claimed by Umunna, insisting the Streatham MP represents broken politics.