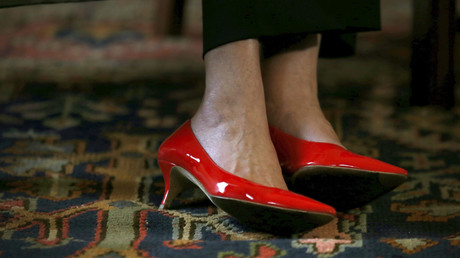 Appointing Theresa May, who didn’t believe in Brexit, as prime minister was a fatal flaw. That is why she deliberately sabotaged the negotiations and brought about this dog’s Brexit, British politician George Galloway has told RT.

British Prime Minister Theresa May cancelled a crucial vote on her Brexit deal which was set to be decided on by the House of Commons this Tuesday. She admitted that the vote was cancelled as she feared she would lose it “by a significant margin.” The Brexit vote will now happen “before January 21,” her spokesperson said Tuesday.

RT asked political analysts what other possible twists and turns might be ahead.

George Galloway, British politician, broadcaster and writer, called the situation May is in an absolute chaos which is “humiliating the country, her own party and democracy itself.”

He thinks the appointment of a person who didn’t believe in Brexit as Prime Minister was “a fatal flaw.”

“It is an Achilles heel of the entire thing…[May] deliberately sabotaged these negotiations and brought about this dog’s Brexit,” he added.

In his view, “this is not Brexit that she is proposing. And therefore a good one hundred of our own MPs will never vote for it, whatever reassurance she brings back. It is like Chamberlin waving his piece of paper promising peace in our time,” said Galloway.

On Tuesday, Theresa May arrived in Berlin for to meet Dutch PM Mark Rutte and Germany’s Angela Merkel for talks to save her Brexit deal.

According to Galloway, the EU leaders “clearly smell blood in the form of a second referendum which they hope would lead to a reversal of the last referendum result.”

“Whether or not they are right about it, it would still leave millions of people very bitter and angry, it would risk social peace in Britain if the first referendum is somehow annulled,” he continued.

While there were more calls for a second referendum, if there is one, Galloway suggested, “it would be close either the other way or the same way.”

The most likely outcome for the nearest future in Britain is “Theresa May being overthrown by her own party and a new prime minister returning to square one,” according to Galloway.

He pointed out that “there are plenty of people in the wings waiting. Boris Johnson even got his hair cut for the occasion, just to look prime ministerial. And he is Churchill’s biographer.”

Why is May buying time?

Thom Brooks, a professor of law and government and the dean at Durham Law School, suggested that Theresa May is trying to buy herself more time.

“It makes you wonder… for what? There won’t be a different deal, any changes to the deal. The reassurances around the backstops – promises from Brussels they really won’t keep Britain perpetually in a customs union… It is very difficult to see how these promises will change any mind at all in parliament,” Brooks explained.

Given the European Court of Justice ruling that there is an option for Britain to remain in without a need of getting any approval from the EU, Brooks said that the strategy of ‘my deal or no deal’ seems to be not the only option now.

“That is really throwing into disarray those who are worried about the ‘no deal’ option – that is not the only option. And that changes the game,” he said.

“If this minority government can’t get its way on fundamental bills like this Brexit vote, if it can’t function, it can’t be a government. And ‘no confidence’ seems to be the only option,” Brooks concluded.


Theresa May is aiming for more concessions from EU on the Irish border issue to help push her deal through.

RT spoke to Máirtín Ó Muilleoir, a member of Irish party Sinn Féin, who claimed that no one on either side of the Ireland’s border wants Brexit.

“I think we do not want to see any border, certainly not in the Northern Ireland, not in the Irish Sea either. The majority here in Northern Ireland voted to remain. It is an absolute democratic disgrace to force us to exit the European Union,” Ó Muilleoir said.