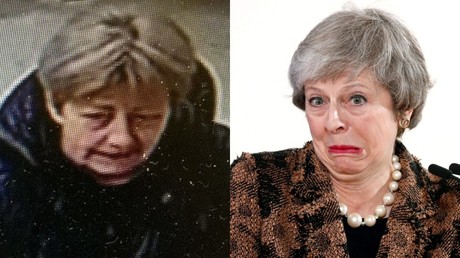 Police are looking for a woman, who bears a striking resemblance to Prime Minister Theresa May, in connection with the theft of money from a cash machine outside a Hertfordshire supermarket.

Hertfordshire police want to speak to a woman with an uncanny resemblance to the PM, after another woman was seen withdrawing money from a cash machine, outside a Tesco Express in Bushey Heath, but accidentally left it behind. It was then quickly snapped up by the May lookalike, the Mirror reports.


Police issued a photo of the suspect who they believe could help them with enquiries. Investigating officer PC Gerard Handscombe said: “It is believed that the woman pictured was in the area at the time of the offence and could have vital information that will help the investigation.”

Eagle-eyed social media observers were quick to point out that the suspect looks like the embattled Tory leader.

One said: “I know it’s not her at all, but that really does look like Theresa May. I imagine she’s probably got more on her plate than pinching money from a cash machine.”

Andy Turpie joked that it looked like “Theresa May’s ‘walk of shame’ home after last night’s celebrations.” Another added: “I thought this was going to be about Brexit.”

It comes after a three-week long chase for a thief, whose uncanny resemblance to Ross from the beloved 90s sitcom Friends made him viral, came to an end with the suspect’s arrest on November 12.

Police had shared CCTV footage of a suspect carrying a crate of beer in October, and the image immediately went viral, leading to Friends memes and puns pouring in.