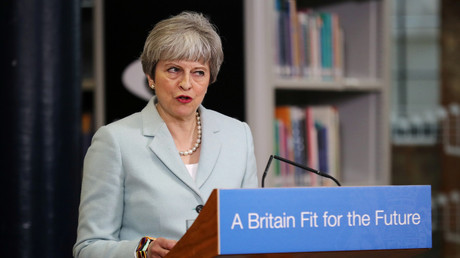 A band of Conservative MPs have compiled a list of their Brexit demands for Prime Minister Theresa May. The letter, which calls for “full regulatory autonomy” has been described by the signatories’ opponents as a “ransom note.”

62 MPs, including Jacob Rees-Mogg and members of the party’s Brexit-backing European Research Group (ERG), have provided Theresa May with a letter outlining six ‘suggestions’ ahead of upcoming negotiations with the EU and a meeting on Thursday of the key Brexit sub-committee of senior ministers at Chequers, the country house of the Prime Minister, on Thursday.

The letter sets out the MPs’ “continued, strong backing” for the vision set out in May’s Lancaster House speech in January 2017.

“We also want to share some suggestions for how it could be achieved,” they wrote in the letter.

This is the problem. On the day that David Davis tries to reassure us that there will be no Brexit deregulation etc, his colleague demand the opposite. Farcical is too kind. https://t.co/NuiIOdekrk

“The UK must be free to start its own trade negotiations immediately.

“The UK should negotiate as an equal partner.

These demands suggest an ideological obsession with Brexit at all costs. Our economy needs all options to be left on the table – transition, customs union, EEA EFTA, the works… oh, and a vote of Parliament…https://t.co/dcipIlOjHw

“Ministers may not want or be able to accept the EU’s timing and mandates as fixed, and should be able to set out alternative terms including, for example, building an agreement based on our World Trade Organization membership instead.”

The letter has drawn criticism from other Conservative MPs. “ERG clearly think they have the prime minister as their hostage,” said MP Nicky Morgan, an advocate for a soft Brexit.

I’m told there is a body called the ERG – the Economic Ruin Group – which is chaired by Mr Rees-Mogg & is planning a Brexit without a trade deal and the end of the Good Friday Agreement.

Sam Lowe, a trade expert at the Centre for European Reform, told the Guardian: “A standstill transition is in everyone’s interest and absolutely essential if the government is serious about negotiating a mutually beneficial ongoing relationship between the EU and UK.

This is important. The ERG is a party within the Tory party, with a few dozen hard Brexit Conservative MPs basically holding the PM to ransom. She lost her mandate for her Hard Brexit on June 8th 2017 but they are threatening to bring her down if she doesn’t do what they say. https://t.co/oOWy6d76LD

“In trying to undermine that the ERG are asking the government to sacrifice the economy on the altar of ideology.”

Labour told the BBC that the letter “exposes the deep divisions that run through the heart of this Tory government.”

A Downing Street source said simply: “We welcome contributions from across the party.”