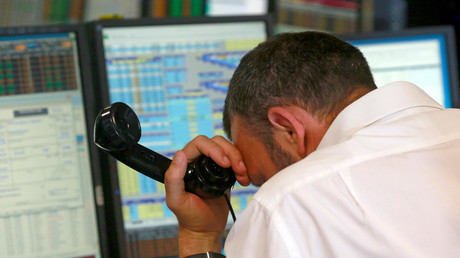 Theresa May’s government are planning to “engineer a financial crash” if parliament fails to back their Brexit deal – in an attempt to frighten MPs into voting it through at a second vote, claims a source close to the PM’s aides.

Since agreeing a draft Brexit withdrawal deal with the EU on Wednesday, May has had to contend with a string of cabinet resignations and a huge backlash from rebel MPs.

The Sunday Times reports that, faced with the prospect of the deal being voted down, the UK government will attempt to plunge the financial markets into chaos – in a bid to scare MPs into eventually voting it through on a second vote.

A source, who has discussed the issue with May’s officials, has told the paper that No 10 has come up with a dark plan to twist the arms of MPs to force through their Brexit deal.

“No 10’s plan is to encourage a crash in financial markets after losing a first vote in the hope this stampedes MPs into voting for it second time,” the source claims.

On social media, there’s been a mixture of shock at the prospect of such a course of action and cynicism at whether the UK government have direct control over the financial markets to engineer a crash. On Twitter, Guardian columnist, Owen Jones asked how is this not a “national scandal?” John McTernan, ex-adviser to former Labour PM Tony Blair, suggests May’s Tory government is merely predicting the inevitable.

How is this not a national scandal? The Tories are planning to engineer a financial crash in order to terrify MPs into voting through May’s terrible deal after they reject it the first time. Imagine the deafening outrage if a Labour Government tried to do this? (via Sunday Times) pic.twitter.com/PH4RvLmmWo

Not so much planning as predicting the predictable

To be frank, they don’t need to engineer anything.
It will just happen.

David Spencer, Professor of Economics and Political Economy at Leeds University, told RT it’s the uncertainty surrounding Brexit that causes volatility in financial markets – and any crash will not be the consequence of direct government action, but the symptom of their policies.

Professor Spencer said: “Financial investors hate uncertainty and while the uncertainty around Brexit drags on volatility in financial markets looks inevitable – the UK govt adds to this volatility so as long as it delays any resolution to the Brexit problem.

“But the volatility is not something they directly control, instead it is a symptom of their behaviour and policies.”

He argues British sterling and the markets will fall if May’s government fails to get their Brexit deal through parliament at the first attempt.

“The pound and stock markets are likely to fall in any event, if the vote in parliament is lost. Look what happened last week when ministers started to resign.”