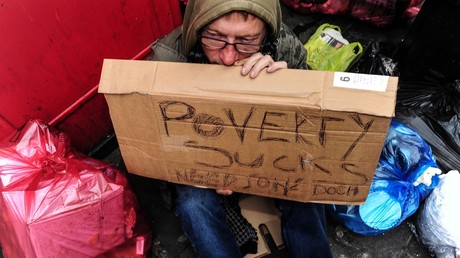 Theresa May faces accusations of twisting reality as she tweeted that 1 million people have been lifted out of “absolute poverty” since the Tories gained power. The PM was branded “deluded” over the state of Britain, on Twitter.

The Tory leader’s tweet on Friday was met with an angry response by people claiming she was being misleading. Some on Twitter suggested the PM is living in a parallel universe, while others accused her of shirking responsibility to her citizens.

The latest figures show that one million people in Britain have been lifted out of absolute poverty since 2010. This is good news, but I’m committed to doing more to build a country that works for everyone. pic.twitter.com/JxQwPwNkKT

who believes a word this imbecile government says these days?

No one believes the twisted spin anymore !

you will be referred to in history as the murdering party !!…… hope one day you will be ashamed of your actions but I won’t hold my breath !

She’s deluded mate. She wants to live on what money we get for a week then she can bloody comment. X

Exactly they don’t live in the real world

Data from the Office for National Statistics (OFS) also revealed on Wednesday that unemployment in the UK unexpectedly fell between November and January. The Joseph Rowntree Foundation, however, said that while the number may indeed have dropped, the number of people in precarious zero-hour contracts has increased five-fold over the past eight years. It also revealed that British workers are earning less than they did in 2010, and that one in eight are now living in poverty.

The latest rebukes comes after the PM was accused of twice misleading the public over figures on police spending. During a Commons session on Wednesday, May reiterated claims of the government spending £450 million on police forces. She doubled down on her position despite it being officially debunked the day before by the UK Statistics Authority.