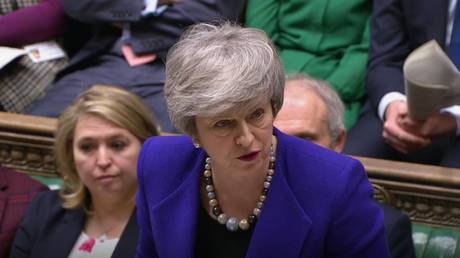 UK MPs take part in PMQs as the issue of the Irish backstop dominate the debate on Brexit. On Tuesday, parliament gave Theresa May the green light to her deal if she can secure “alternative arrangements.”

May now has two weeks to broker key changes to the EU Withdrawal Agreement with Brussels, before MPs have another meaningful vote on her deal. The UK is scheduled to leave the EU on March 29.

Also on rt.com
No deal, no money: UK Brexit minister warns EU won’t get a penny for divorce bill


Labour leader Jeremy Corbyn asked May what exactly were the “alternative arrangements” to the backstop she plans to put to the EU.

The PM responded by insisting her government was considering a number of proposals, including an exit date or a unilateral exit mechanism and trusted trader plans will be examined.

Corbyn told the house of commons that “Well, none of that was clear to me, I don’t know about anybody else….” – which triggered laughter among the opposition benches.

The Labour leader claimed that UK Brexit Secretary Steve Barclay had dodged the question of alternatives to the backstop in an interview with the BBC on Wednesday morning.

In his interview with the Today programme on BBC Radio 4, Barclay failed to come up with any examples that could viably replace the Irish backstop, while still preventing a hard border on the island of Ireland.

Corbyn also highlighted comments made by Brexit Minister Kwasi Kwarteng who has insisted that alternative arrangements mean looking at technology. He asked the PM what technological advances she is expecting in the next 58 days.

May couldn’t give a direct answer and instead said that a majority of MPs voted for a new approach on Tuesday and that they want a change to the backstop.

Corbyn has finally agreed to face-to-face discussions with May on Brexit, after ruling out negotiations until she took the prospect of a no-deal off the table.

Early indications show that May has a tough task getting the necessary concessions from Brussels. Guy Verhofstadt, the European Parliament’s Brexit co-ordinator, has insisted that the Irish border backstop must remain part of the UK’s withdrawal deal from the European Union.

A spokesperson for European Council President Donald Tusk has said that he will call PM May later on Wednesday evening to talk about Brexit. Tusk issued a firm statement on Tuesday evening in the aftermath of May receiving the backing of UK parliament to re-negotiate her deal, saying that the “Withdrawal Agreement is not open for re-negotiation.”