UK Prime Minister Theresa May outlined the UK/EU withdrawal deal to Parliament, following European Council President Donald Tusk’s announcement of an agreement in principle to a text setting out the future UK/EU relationship.

May told MPs that she has been clear with European leaders, including those of Spain, in guaranteeing Gibraltar’s sovereignty.

In response, Opposition leader Jeremy Corbyn slammed the deal as “26 pages of waffle.”

Highlighting the deal’s ambiguity, Corbyn quoted a part of it, reading: “The parties should consider appropriate arrangements for cooperation on space,” to much noise from the Labour benches.

In response, May attempted to prove that the deal matched Labour’s six tests for Brexit, but the prime minister could barely be heard as after she read out each test, MPs from both sides screamed ‘yes’ or ‘no’. They were only calmed after an intervention from the speaker.

Duncan Smith confirms EU Brexit deal will be killed by him and his Brexiter colleagues in parliament: he rejects her work to adopt his tech solution to the Northern Ireland border problem in the Political Declaration, implying it’s meaningless. Very bad for @theresa_may

Despite earlier praise from May, IDS sounding very unhappy…says withdrawal agreement has to be amended.
May refuses to give that commitment.
It could be the thing that does for her.

An intervention from Brexiteer Iain Duncan Smith indicated trouble for May, as the ex-Tory leader indicated that he and other Brexiteers would vote against the deal over the Irish backstop.

More trouble came later, as Sir Bill Cash – another Tory Brexiteer – indicated that the European Scrutiny Committee will hold an inquiry into the government’s handling of the Brexit talks.

The DUP’s chief whip Sir Jeffrey Donaldson issued a stark warning to the PM, telling her that if she wants the support of his party then she must do away with the contentious Irish backstop. 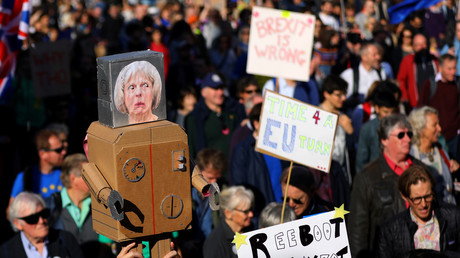 Backbench Tory MP Dominic Grieve, an ardent Remainer, told May that the Irish backstop “will create a constitutional anomaly.” He said that her deal needs the seal of approval from British citizens in the form of a ‘people’s vote.’

EU leaders have agreed on the Brexit draft “at negotiators’ level and agreed in principle at political level,” Tusk wrote on Twitter, citing a message which he had received earlier from the head of the European Commission, Jean-Claude Juncker.

May and her team now face the uphill task of persuading MPs to vote for the agreement.

Despite seemingly seeing off a coup from Jacob Rees-Mogg and his Tory faction (the European Research Group), as things stand May is unlikely to get the deal through Parliament. As well as the expected opposition from Labour, May faces defeat should rebel Tories and her Northern Irish allies, the DUP, follow through with threats of their own and vote against it.