Janine Jackson interviewed Corey Hutchins about Denver Post journalism cutbacks for the May 25, 2018, episode of CounterSpin. This is a lightly edited transcript. 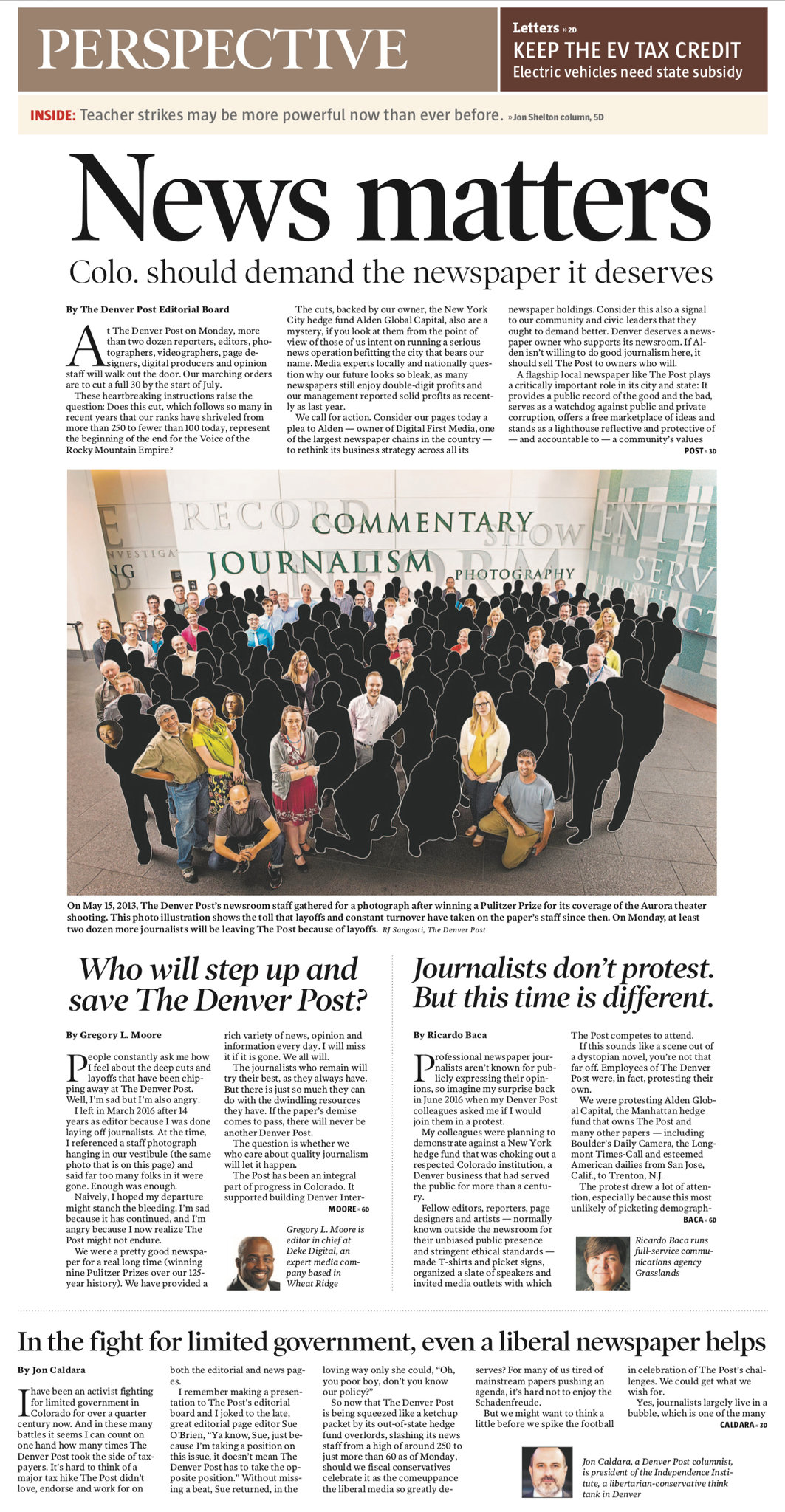 Janine Jackson: Since hedge fund Alden Global Capital has taken control of the Denver Post, the paper has seen rounds of layoffs. The newsroom has gone from 200 or so people to more like 70, with 30 more jobs slated to be cut this summer. Journalists have been moved to the printing plant to further cut costs for Alden, whose founder, Randall Smith, describes himself as investing in “distress.”

Denver Post workers protesting the unceremonious gutting of their newspaper were joined recently by journalists from some of the other 90-odd papers Alden controls, via ownership of Digital First Media, at a rally at the vulture fund’s HQ in New York City. In a New York Times account, the Denver Post’s Elizabeth Hernandez says, as reporters do, that she doesn’t like being the story, but, she adds, “If we don’t tell our own story now, I don’t know how long we’ll be able to tell our community’s.”

Corey Hutchins is a journalist for the Colorado Independent, as well as a correspondent for Columbia Journalism Review’s United States Project. He joins us now by phone from Denver. Welcome to CounterSpin, Corey Hutchins.

Corey Hutchins: Hi. Thanks for having me.

JJ: Well, the story of the Denver Post has not been front-page news, if I can say it that way, around the country. A few national pieces have appeared, like that one in the New York Times, but I wonder if people maybe see it as a local story, which it is and it isn’t, right? How would you put what is happening at the Post in context for people outside Colorado?

Now, I write about the media for CJR, for the Colorado Independent. So I’m seeking out these stories, and I write a weekly newsletter about the media in Colorado, and the past three weeks, it’s been a lot more work, because I’m actually reading tons of stories in larger magazines on both coasts and in other states about what’s going on at the Denver Post.

I’m sure a lot of the media about this is being consumed by people who pay very close attention to media and media criticism, but I do think that there’s going to be some spillover into the mainstream population and mainstream news consumers. One of the things that’s pushing that is the public activism that the journalists and their allies are creating, protesting outside of their newsrooms, they’re getting the TV coverage locally and nationally on that. Here in Denver, the community is aware of what’s going on. How broad that becomes across the country is a big question.

JJ: You interviewed Julie Reynolds, the independent reporter who’s really tracked the story of Alden Global Capital and its CEO Randall Smith, and traced where it’s taking money from and where that money’s going, and I was struck by her description of what it was like working for a DFM paper, the Monterrey Herald—and I’m not saying it’s unique to DFM — but she talked about not being able to get a manila folder, you know, and reporters buying their own pens.

But then I was struck, particularly, by—she mentioned demands that reporters all of a sudden need to get out three stories a day with their name on them, “even if you rewrote a press release.” So there’s a direct line—we’re talking about how to keep the public interested—there’s a direct line between cost-cutting in the newsroom and, you know, crap in the newspaper, isn’t there? That’s a relationship.

CH: Beyond just the pressure on reporters to have to do more — and, at the Denver Post, I wrote a story for CJR about how at one point, there were basically byline quotas — it’s this whole thing that we’ve got to do more with less. I will say the Denver Post still does really quality journalism, and they should be really proud of that. 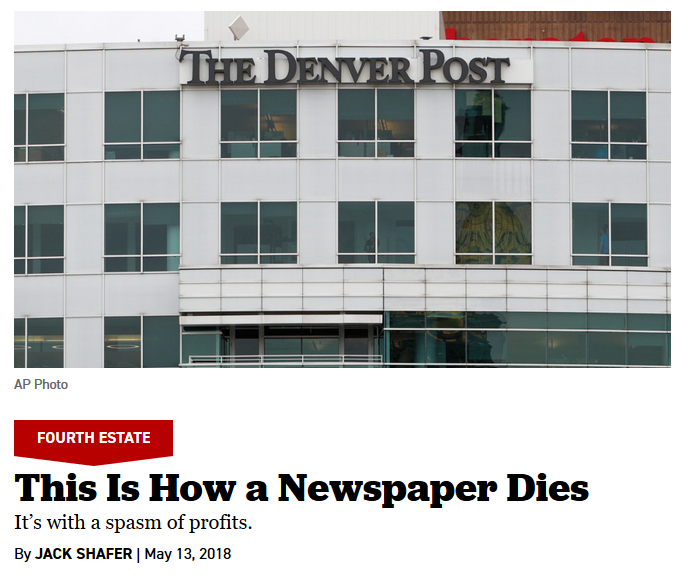 JJ: Industry-watcher Jack Shafer says it’s kind of silly to be mad at Alden. They’re a money-making company making money, and, anyway, it’s readers who are responsible for the death of newspapers, because they don’t buy them anymore. In his words:

Smith may be a rapacious fellow, but his primary crime is recognizing that print is approaching its expiration date and is acting on the fact that more value can be extracted by sucking the marrow than by investing more deeply or selling.

Is that cynical? Is that true? Is that both? What do you make of that attitude as we go forward?

CH: That argument is kind of the one that is being pushed by corporate people at Digital First Media and the editor of the Denver Post, who basically says, hey, it’s not so much that a hedge fund owns the newspaper. The reason we’re downsizing and laying off reporters is really only because of market forces. It’s because our subscription rates are shrinking, and so is our advertising revenue.

Now that is true. The subscription rates probably are shrinking and their advertising revenue is declining. Now the other side of that is folks who say, well, that’s happening at other newspapers, too, but those papers are willing to accept a lower profit margin than the newspapers owned by Digital First Media, who, according to national newspaper analyst Ken Doctor, have really high, double-digit profits that he says are better than their peers. You do have this nationwide problem of print declining because of ad revenue and less people subscribing, and I think it’s exacerbated at the papers owned by Digital First Media, because their hedge fund wants these massive profits. That kind of creates a perfect storm if you’re working for a paper like that. 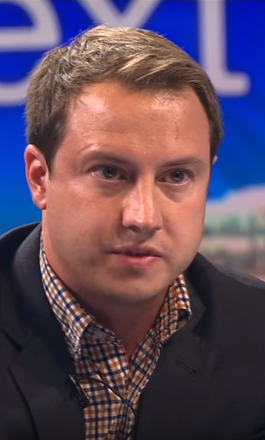 Corey Hutchins: “If the Denver Post goes away, it will be the first major city of its size without a local newspaper, and I think that would be disastrous.” (image: Next 9News)

JJ: Absolutely. People say it’s OK that newspapers are dying, because the internet. I just wonder, what do you think would be lost if, for example, the Denver Post were to be starved into nonexistence, eventually. What gets lost when we lose papers?

CH: Bottom line: information. If the Denver Post goes away, it will be the first major city of its size without a local newspaper, and I think that would be disastrous. There was a lawmaker who was quoted by a public radio station reporter, who was going around and asking for reactions at the legislature, “What do you think about all of this stuff at the Denver Post?” She overheard some lawmaker joke, “Well, I guess it means we’ll be able to do whatever we want now.”

That may have been a joke, but I think that’s a pretty sad commentary, and capitalizes the worst of the worst of what would happen. You’ve got less people doing journalism in a city like this, then the truth is we don’t know what we don’t know, and that thought’s pretty scary.

JJ: We’ve been speaking with Corey Hutchins, reporter for the Colorado Independent and Columbia Journalism Review. Thank you so much, Corey Hutchins, for joining us this week on CounterSpin.