Janine Jackson interviewed Saru Jayaraman about tipped worker rights for the August 10 episode of CounterSpin. This is a lightly edited transcript.

Janine Jackson: Saru Jayaraman is the co-founder and co-director of the Restaurant Opportunities Centers United and director of the Food Labor Research Center at the University of California, Berkeley. She’s author of the books Behind the Kitchen Door and Forked: A New Standard for American Dining. When we spoke with her in 2015, we asked what she thought people should know about the tipped wage for restaurant workers.

Saru Jayaraman: I think the big thing people should know is that it is the second-largest and fastest-growing sector of our economy, but pays the absolute lowest wages in the country. And that is due to the money, power and influence of a trade lobby called the National Restaurant Association, which leads the Fortune 500 restaurant chains in our country, and whose power dates back over 100 years to the emancipation of the slaves, when they essentially first fought for the right to not pay workers anything—especially former slaves, who were the first tipped workers in our country—not pay them anything and let them live on customer tips.

And there’s just such a great deal of misinformation about who those workers are today, even. There’s such a misperception, that the Restaurant Association likes to promote, that these are very well-paid tipped workers, white guys working in fancy fine-dining restaurants, when in fact the vast majority of tipped workers in America, 70 percent in fact, are women who work at IHOP and Applebee’s and Olive Garden, and earn a median wage of $9 an hour including tips, and suffer from three times the poverty rate of the rest of the US workforce, and the highest rates of sexual harassment of any industry in the United States, because they are forced to live in large part on tips rather than receiving a wage from their employer. 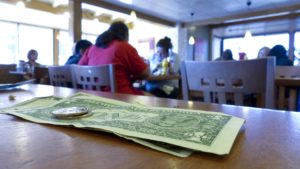 ‘If you are living completely off your tips, you are completely dependent on the whims of the customer.’

JJ: Well, some of the defenses of tipping that are being brought out now really reflect that kind of feudal attitude. Richard Cohen at the Washington Post writes, “I like to reward but occasionally I like to punish.” And it really gets at something, I think, at kind of the baseline. And hearing you say the origins of it really are that it comes from that attitude, that people should serve at your pleasure.

SJ: That’s right, and let me be clear, because what I really appreciate about your show and program is really clearing up what maybe other media sources have conflated. Our fight, our campaign, is not actually at this minute to eliminate tipping altogether; that’s a huge misconception. We are trying to eliminate the lower wage for tipped workers, which this industry has gotten away with for over 100 years.

The true history is that tipping originated in Europe; when it came to the United States in the late 1850s, there was a massive anti-tipping movement so great that five states passed bans on tipping. And two industries, the restaurant industry and the Pullman train company, squashed that movement, and demanded the right to hire newly freed slaves and not pay them anything and let them live on customer tips.

And that idea, that the restaurant industry in particular could not pay its workers a wage and let them live on customer tips, was codified into the very first minimum wage law, as part of the New Deal, which gave tipped workers the right to a zero dollar minimum wage. And we’ve gone from zero dollars in 1938 to a whopping $2.13 an hour, which is the federal minimum wage for tipped workers in our country.

There are restaurants that have chosen to follow our lead and eliminate the lower wage for tipped workers in their restaurants by eliminating tipping. And if they are doing it in a transparent way that makes their workers whole, then we are fully in support of that. But right now, we feel that as long as we are talking about minimum wages in this country of $10, $12 and $15 an hour, that’s actually not enough to live on anywhere in this country, and so tips are absolutely necessary at this moment, on top of a wage, to get workers closer to something livable.

But what we don’t want is what we have right now, which is that those tips can be counted against wages, so that in essence most workers in this industry in this country are living almost entirely on customer power, on that power to punish or reward, rather than on a base wage from their employer, like every other industry has to provide. 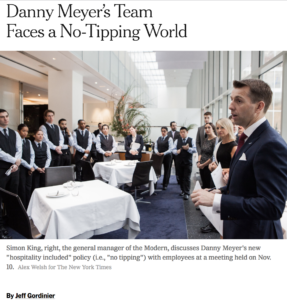 JJ: Well, let me ask you as a point of information, because when outlets like the New York Times and USA Today print articles about the tipped wage, as a matter of course they get a letter from a representative of the National Restaurant Association that says, “No one gets a sub-minimum wage because if waitstaff don’t get enough from tips plus that $2.13 an hour to get up to minimum wage, the employer tops it off.” Now is that the law, but not the case?

SJ: That’s exactly not the case. The US Department of Labor reports an 80 percent—80 percent—violation rate with regard to this issue of employers having to make up the difference hour by hour, and ensure that tips actually bring you to the full minimum wage. I feel for employers; it’s an extraordinary burden to have to ensure, hour by hour—it takes a lot of accounting and HR which most small businesses don’t have. It’s a tremendous burden on small business, and I will say actually this is partly why so many employers have started to move in our direction, why we’re seeing so much industry shift on this issue, because even some employer-side attorneys have come out saying this is a tremendous liability and burden on small businesses in particular, that have to calculate this difference or get sued. So it doesn’t happen; it’s a huge liability.

But really, fundamentally, on top of that, I want to say even if there was 100 percent compliance on this issue, which there obviously isn’t, it still wouldn’t work. Because when you are a woman who lives off tips for the majority of your income, as 6 million women in America do, you have to tolerate whatever a customer might do to you, however they may touch you or treat you or talk to you, because the customer is always right, because the customer is paying all of your income, truly, because your wage is so low—if you get $2, $3 or $4 an hour as it is in 43 states, your wage is so low it goes entirely to taxes, and you’re living completely off your tips. So if you are living completely off your tips, you are completely dependent on the whims of the customer and you have to tolerate this kind of behavior.

And our research shows it goes a step further; we found that management in states with lower wages for tipped workers encourage these women to objectify themselves, wear tighter clothing, show greater cleavage in order to get more money in tips at three times the rate as they do in states like California, where a woman actually gets a full wage and doesn’t have to rely on the whims of a customer.

I mean, that absurd comment by the Washington Post reporter—in any other industry, any other service profession that we interact with daily, from retail to getting gas, to anything where we interact with customer service, if we’re not pleased with service, we have the right to go to management and complain, and that is how it should be in this industry, too. We have the right to go to management and complain. But a woman’s ability to pay her bills, and not have to sell her body, and feed her family should not be dependent on the whims of customers. It should be dependent on her employer who supposedly employs her and has the responsibility to ensure that she is actually paid for the work that she does.