The Socialist Phenomenon, by Igor Shafarevich

Igor Rostislavovich Shafarevich (3 June 1923 – 19 February 2017) was a Russian mathematician who contributed to algebraic number theory and algebraic geometry. He wrote books and articles that criticize socialism, and was an important dissident during the Soviet regime.

Shafarevich’s book The Socialist Phenomenon, which was published in the US by Harper & Row in 1980, analyzed numerous examples of socialism, from ancient times, through various medieval heresies, to a variety of modern thinkers and socialist states. From these examples he claimed that all the basic principles of socialist ideology derive from the urge to suppress individuality.

Shafarevich introduces a concept that I have not read elsewhere, the concept of chiliastic socialism:

Chiliasm: the doctrine of Christ’s expected return to reign on earth for 1000 years; millennialism.

The Foreword is written by Aleksandr Solzhenitsyn.  He offers:

It seems that certain things in this world simply cannot be discovered without extensive experience. 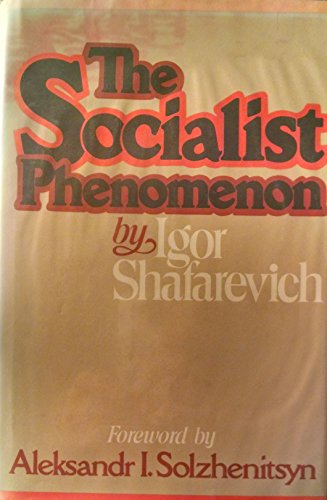 The ideal of socialism butts up against the reality of socialism; Solzhenitsyn suggests that only those who have lived it can understand it.  Something for those who dream, unbelievably, of a socialist utopia sadly are unable to grasp.

Shafarevich points out with great precision both the cause and the genesis of the first socialist doctrines, which he characterizes as reactions: Plato as a reaction to Greek…