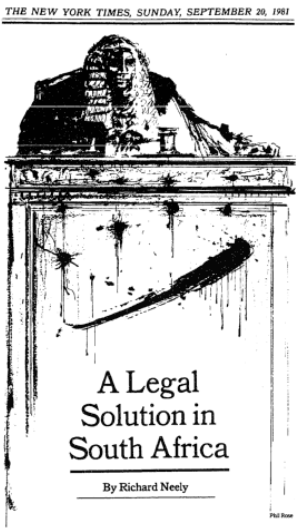 When apartheid reigned in South Africa, Western media commentary frequently suggested that if a one person, one vote system were adopted, black South Africans would massacre whites, oppress them or force them to flee. The same line of thinking can today be found in media discussions of Israel/Palestine, with warnings that Israelis and Palestinians sharing a single, democratic country would lead to Palestinians slaughtering Jewish people or driving them out. Such analyses reveal the racist assumption that black people and Arabs are too prone to irrational violence to be trusted with democracy.

A New York Times (9/20/81) article by Richard Neely said that, if the United States pressured South Africa to adopt a one person, one vote system, America might be “helping to precipitate a race war of all against all.” That Neely’s primary concern was violence carried out by black people was clear when his article went on to say that

certainly the lives of the 740,000 Asians in South Africa would be jeopardized under any one-man one-vote constitution, which can be altered by parliament, if the experience of either Kenya or Uganda is indicative.

William Safire wrote in the New York Times (8/7/86) that one person, one vote,

means majority rule, and nonwhites are the overwhelming majority in South Africa. That means an end to white government as the Afrikaners have known it for three centuries; that means the same kind of black rule that exists elsewhere in Africa, and most white South Africans would rather remain the oppressors than become the oppressed.

Safire was either unable or unwilling to conceive of the possibility that black people might not oppress white people, even though there were scant examples of that happening compared to voluminous cases of whites oppressing blacks.

In the Times (7/20/85), John O’Sullivan criticized anti-apartheid voices in the West that he thought were being insufficiently patient with the pace of change in South Africa:

What accounts for the grudging, almost hostile reception for the reforms in the West? The laws prohibiting interracial sex and marriage, for instance, were considered major offenses against human dignity until they were repealed; they were then dismissed as likely to affect very few people. It is almost as if some of apartheid’s critics do not want to see it eroded peacefully. They want a dramatic conclusion, a bloodbath in which the wicked perish.

The suggestion was that calling for a rapid end to apartheid was tantamount to calling for white South Africans to be slaughtered en masse.

A piece in the Wall Street Journal (10/30/85) by Karen Elliott House was conscious of the parallel between South Africa and Israel/Palestine, albeit in a twisted way:

The more the US insists on negotiations with the ANC, the more it strengthens the violent extreme and undermines the moderate middle….

Once the US insists the ANC is the legitimate voice of black Africans, then the ANC becomes the only group with whom the Pretoria government can negotiate if it wants to retain some measure of international approval and investment. Yet the ANC has made it clear it isn’t interested in sharing power, just seizing power.

Predictions of mass violence against whites by blacks in South Africa proved false. Nor, despite some emigration, has there been a mass exodus of white South Africans; their population has declined by some 13 percent since the first free election in 1994. But this has not stopped media pundits from making equivalent claims about Israel/Palestine: claiming that a one-state solution for Israel/Palestine—that is, a single multiethnic, democratic state, comprising the West Bank, Gaza, Jerusalem and pre-1967 Israel, in which all citizens are equal, regardless of ethnicity or religion—is bound to lead to a widespread slaughter of Jewish people.

Tony Bayfield argued in the Guardian (3/23/05) that if “the Jews of Israel” were to be “swallowed up as a minority in a binational entity—Judaism would, I believe, also cease to exist, except perhaps for a tiny remnant of Jews.” In Bayfield’s view, Palestinians are such savages that an attempt to have them live as equals with Israelis would somehow wipe out virtually the whole of the Jewish faith—across the entire world.

The Washington Post’s Jennifer Rubin wrote in (4/29/14) wrote that endorsements of the one-state solution “amount to calls for genocide.” She quotes Tawfiq Tirawi, a member of the Central Committee of the Palestinian group Fatah, saying:

We must return to the option of one Palestine from the [Jordan] River to the [Mediterranean] Sea…. The only solution before us is the historic solution presented by Fatah in 1968.

Rubin went on to say: “How would he obtain his one-state solution? When you ‘drive Israel’ into the sea, you must destroy the Jewish state and its Jewish citizens.” Her use of quotation marks is odd, since Tirawi did not say anything about “driv[ing]” anyone into the sea, nor did he discuss “destroy[ing]…Jewish citizens.” 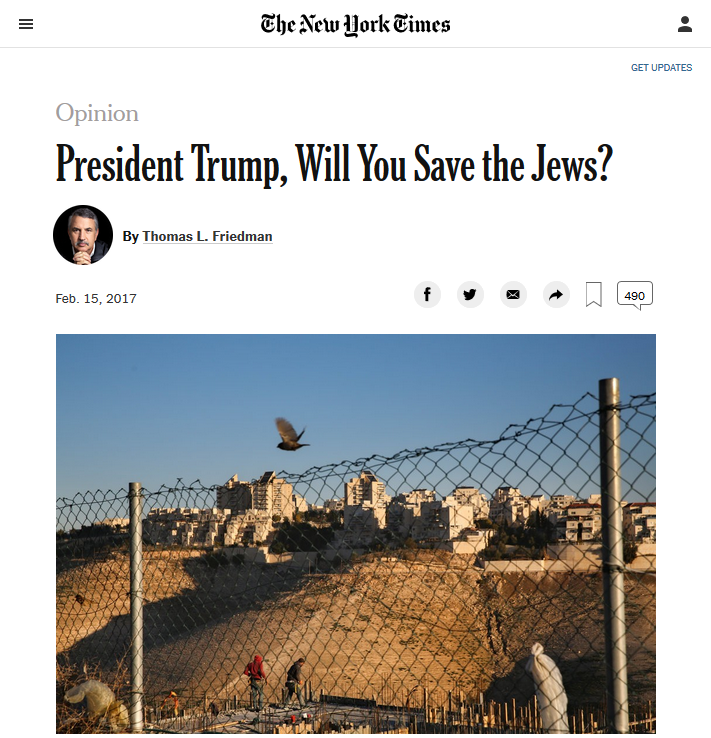 The headline over a Thomas Friedman column (New York Times, 2/15/17) implies that sharing the land between Jews and Palestinians would be the end of the Jewish people.

Rubin later cited passages from the PLO’s 1968 charter, the 1968 solution to which Tirawi refers, which mentions liberating Palestine and “armed struggle”—a right to which Palestinians are entitled under international law—but does not say the group plans to “destroy…Jewish citizens” or “drive” people into the sea, let alone carry out a genocide. Yet Rubin proceeded to call the idea of having a single, binational state across all of historic Palestine “incitement to violence and admiration for eradication of the Jewish people (genocide, that is).”

New York Times columnist Thomas Friedman (2/15/17) argued that it would be a “disaster for the Jewish state and the Jewish people” if the expansion of illegal Israeli settlements on the West Bank made “the separation of Israelis and Palestinians in a two-state solution impossible.” The headline of his column, “President Trump, Will You Save the Jews?” echoed this notion that Jews and Palestinians sharing the same land as equals would be an apocalyptic danger to all Jewish people across the globe, presumably including the large numbers of them who are anti-Zionist.

A Times editorial (2/15/17) published a day later didn’t invoke the specter of Palestinian violence as directly as Friedman, but it described Trump as “dangerously” questioning the idea of a two-state solution, warning of the likely consequences of a one-state solution:

What exactly would be “miserable” about a multiethnic state with equal rights for all was left unsaid.

Whether in South Africa or Israel/Palestine, the argument has been the same: Hypothetical threats posed by the oppressed to their oppressors justify continued subjugation.