The Uniqueness of Western Law: A Reactionary Manifesto, by Richard Storey

I first came across Storey through a piece he wrote regarding his conversation with Frank van Dun.  To summarize: Storey viewed the medieval Church as the biggest hindrance to liberty and the promoter of centralized statism; van Dun set him straight.  Just how straight we will find in this book.

Storey has offered an introduction and outline to this work, through a piece published at the Mises site:

The study of Western Civilization has been all but eradicated. This was no accident but, rather, an aggressive policy of leftist academe which has used exclusionary tactics to dominate and pervert the culture and purpose of our universities since the 1960s and 70s. But, for us students, driven underground, Western history is the greatest treasure trove of almost every faculty. Not least of these is natural law. 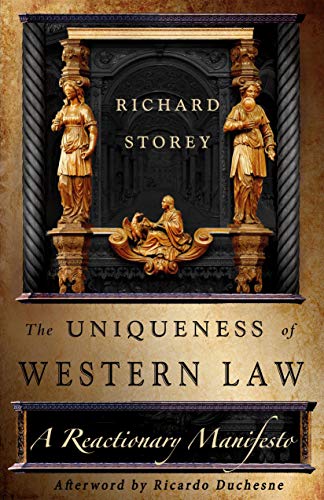 The Uniqueness of West…
Richard Storey
Check Amazon for Pricing.

I will cover the book over a series of several posts, beginning with this introduction.  The book is written in four parts: Natural Law, Socio-Biology, Politics, and Family.  You can imagine that one or more of these parts might touch on politically incorrect topics.

There are brief recommendations from individuals that will be well-known to readers here:

Gerard Casey: “Readers…won’t like [this] book – they will either love it or hate it!”

Walter Block: “I take my hat off to this author for his fearlessness and bravery.”

Frank van Dun: “[Storey] makes a compelling case for a conscientious libertarianism, rooted in the basic idea of the Western philosophical and Christian tradition…Storey effectively destroys the caricature of libertarianism as “globalist…