In 1762 Jean Jacques Rousseau published his book, The Social Contract, in which he wrote, “In Greece, all that the populace had to do, it did for itself; it was constantly assembled in the public square.” Rousseau was well aware of the importance of public spaces when it came to political change. Indeed, the storming of the Bastille on 14 July 1789 showed the power of the populace against armed guards defending the medieval fortress, armory, and political prison in Paris which at the time represented royal authority. Interestingly enough, the decision had also been taken to replace the Bastille with an open public space and the fortress was demolished within five months. Since then many open public spaces around the world have been the centres of political activity. Political art became an important part of these demonstrations and uprisings in the form of murals, political graffiti and carnival floats. Even earlier political art in the poetic form had a role to play in Rome in the 16th century as people posted poems critical of the popes on statues (originating with the Il Pasquino statue) which soon became known as the Talking Statues of Rome. 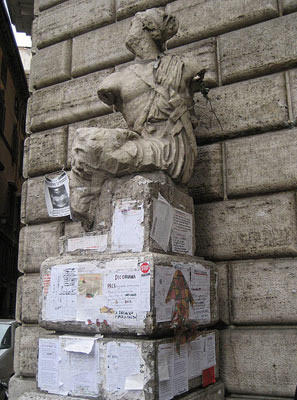 I choose to reflect the times and the situations in which I find myself. How can you be an…