When the original version of Home Truths appeared in 2006, it was already an accomplished work of great technical sophistication and emotional insight. This expanded and extensively revised edition manages to substantially improve upon the earlier book, drawing on recently-discovered source materials to clarify and deepen the complex and emotionally charged narrative of the author’s parents’ courtship in Dayton in the 1950s—a story of often short-lived triumphs and sometimes lingering disappointments—centered around the formidable figure of the poet’s maternal grandmother, a matriarch who did whatever she had to, to ensure that the family business, a funeral home, would continue to prosper after her husband’s sudden and unexpected death. Mixing personal recollection with a wealth of reconstructed correspondence, Ryan Guth displays an enviable facility with both poetry and prose; while the majority of the verse pieces presented are scored as free verse, the sequence also contains one extraordinary sonnet. 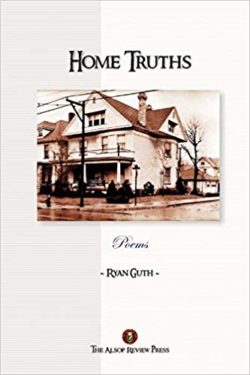 In every poem, postcard, or letter herein, a wealth of specific detail gives substance and vivid life to the lost world of the poet’s childhood, as in this passage, near the beginning of the book, where the poet’s parents reluctantly pose for a photograph:

Back home, Phyllis and Hank
(still newly-weds, almost)
in the back yard. Un-
cooperative, he’s
kept his shades on,
jammed his right hand
so deep in the pocket of his blazer
the sleeve’s wrinkled