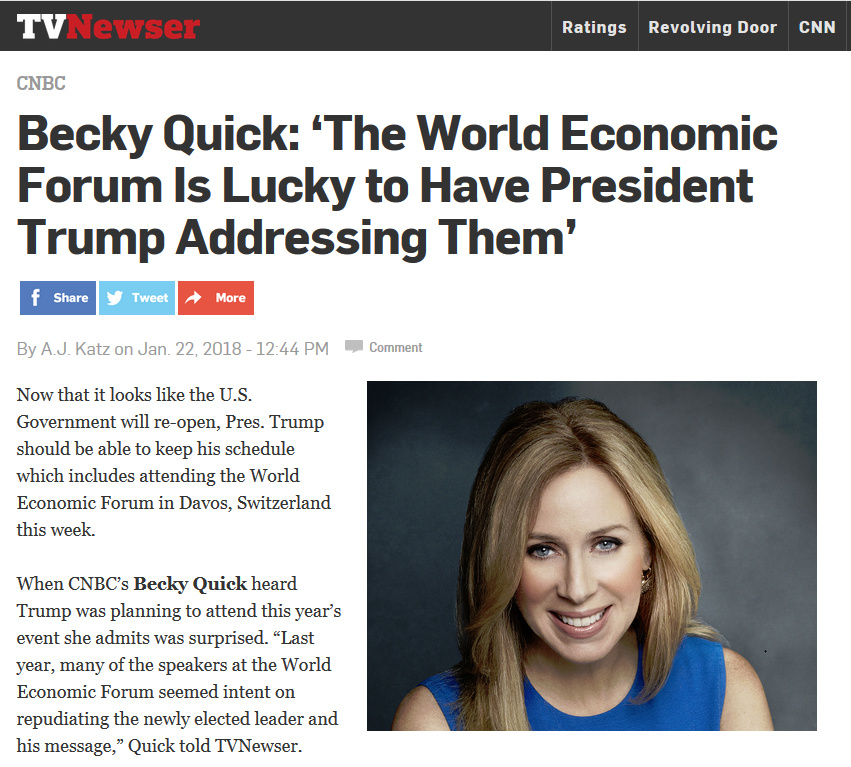 “The World Economic Forum is lucky to have [Donald Trump] addressing them,” says CNBC host Becky Quick. Quick told industry journal TVNewser (1/22/18) that Trump’s appearance in Davos, Switzerland, will make it “the perfect venue for us to get to the heart of what is powering the engine behind this amazing surge in global and domestic growth.” Though she says she’ll leave assigning credit to others, she allows, “It would be difficult to completely discount the instantaneous surge in the stock market that started the day after Donald Trump’s election and has continued ever since.”

Far from completely discounting it, a range of economists, like those cited in a recent AP piece (1/17/18), simply note that the state of the economy writ large is still essentially that inherited from the previous administration; and as for investment growth, economists like Dean Baker (FAIR.org, 1/2/18) have noted that not only have there been many periods in both the recent and more distant past in which it grew at a more rapid pace, it is quite concentrated in the oil and mining sector. AP even reminded dryly that as a candidate, Trump called government data like the unemployment rate “one of the biggest hoaxes in modern politics,” but now presents  such data as unambiguous.

As for Quick, she’s only referring to corporate media’s open secret when she says, in response to whether she cares about ratings: “Not at all. I pay attention to our viewers, who are the wealthiest, most influential people in the world.”

Commercial media is, of course, a system for serving corporate advertisers the audience they want. And wealth and influence aren’t so much condiments as the main ingredient. CNBC‘s function as a journalistic institution, Quick explains, is to bring that particular audience “the stories they care about”: “We can’t lose that focus for a second, or get caught up in the general media noise, or we do our audience a disservice.”

We are right to ask who is making news media for those outside of wealth and influence. As well as whether that “general media noise” would include things like the new report from Oxfam International (1/22/18) that found that 82 percent of all wealth created in 2017 went to the top 1 percent of the world’s richest people, while nothing at all—zero percent of it—went to the poorest half of the global population. Would it really do CNBC‘s wealthy, influential viewers a disservice to consider the statement from Oxfam’s Winnie Byanyima that “the billionaire boom is not a sign of a thriving economy but a symptom of a failing economic system”?

You can send a message to CNBC here (or via Twitter: @CNBC). Please remember that respectful communication is the most effective.