Syrians frantically hosing each other down and toddlers with oxygen masks – videos of Douma’s alleged chemical attack horrify and shock. Despite this, some UK figures are now starting to question the narrative.

Upon the news breaking, originally from the White Helmets – a group that operates partly in areas under the control of Syria’s Jihadist opposition – French President Emmanuel Macron insisted that they had evidence that Syrian President Bashar Assad had used chemical weapons in the militant-held city of Douma.

US President Donald Trump was eager to announce on Twitter that the “smart” bombs would soon rain down on Syrian forces. UK PM Theresa May chipped in with a “significant body of information, including intelligence [that indicated] the Syrian regime is responsible for this latest attack” before joining the allies in a strike against the Syria in the early hours of Saturday morning, without taking the issue to parliament.

Some UK figures are now querying the allies’ line of logic. Are the videos legitimate? Why would Assad, who was about to retake Douma, bomb his own people? And where is the proof from reliable, third-party sources?

Retired First Sea Lord, Lord West of Spithead told the BBC he doesn’t understand the narrative that posits Assad as responsible for the attack. “President Assad is in the process of winning this civil war,” he said. “And he was about to take over and occupy Douma.

“He’d had a long, hard slog capturing that part of the city. Just before he goes in and takes it all over, he decides to go and have a chemical attack. It just doesn’t ring true.”

West, who had a seat on the National Security Strategy Committee – wondered what “benefit is there for [Assad’s] military.” He added: “We know in the past some of the Islamic groups have used chemicals and there would be huge benefit in them labeling an attack as coming from Assad.”

Multi-award winning journalist Robert Fisk is at the coal face on the ground in Douma, speaking to civilians, doctors, and nurses right there in the Eastern Ghouta city… none of whom, he says, can remember a chemical attack. They did, however, note that a panic was created in the underground hospital by members of the White Helmets while patients were being treated for hypoxia – Oxygen deficiency that was caused by a dust storm. 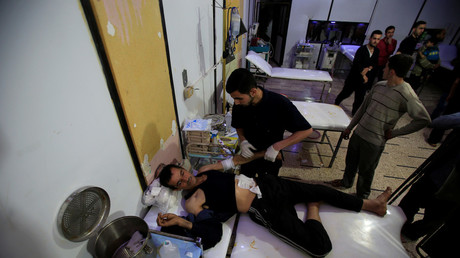 “I was with my family in the basement of my home three hundred meters from here on the night but all the doctors know what happened,” a Syrian doctor, who was not an eyewitness to the attack, told Fisk. “There was a lot of shelling [by government forces] and aircraft were always over Douma at night – but on this night, there was wind and huge dust clouds began to come into the basements and cellars where people lived.

“People began to arrive here suffering from hypoxia, oxygen loss. Then someone at the door, a ‘White Helmet,’ shouted ‘Gas!’ and a panic began. People started throwing water over each other. Yes, the video was filmed here, it is genuine, but what you see are people suffering from hypoxia – not gas poisoning.”

Mail on Sunday columnist Peter Hitchens has taken to his blog to express his doubts over the Syrian chemical attack. Hitchens points out that publicly available evidence – as in, not the mysterious, unspecified proof from Macron – has no sources or way to verify its accuracy.

“How in that case did they reach their confident conclusion that the Syrians did it?” Hitchens queried. “Unnamed witnesses are cited along with films allegedly recorded at the time on which aircraft sounds have been heard. Since so much weight is given to this evidence, it is frustrating that we are not, in this version, given any details of the sources or of the verification methods used.”

Republishing a previous blog from earlier in April, Hitchens went on to say that: “In my view, a pretty arduous and definitive demonstration that the previous accusation of poison-gas use by Assad’s forces had never been proven, though it had been made to look as if it had been. It is also, though I say it myself, fascinating in many ways, if you are interested in evidence at all.”

Former British ambassador to Syria, Peter Ford, appeared on Fox News, slamming trigger-happy President Trump and his advisers. “It’s not certain by any means that it was a chemical attack,” Ford said. “There are reports from Western journalists who were in Douma yesterday that they could find no folks that could confirm that there had been a chemical attack. 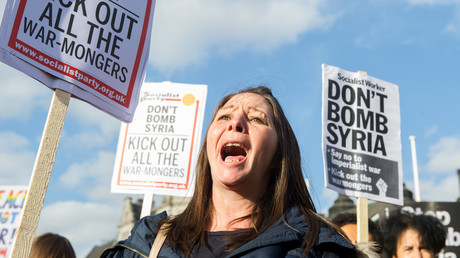 “They went to the hospital where those videos were filmed and spoke to doctors – named doctors, so this can be checked – who said there was no chemical attack. What there was an ordinary bomb attack which had people streaming into the hospital with smoke inhalation problems.

“The White Helmets – the jihadist medical auxiliaries – started shouting ‘Gas,’ caused panic, and everyone went into gas mode, started with the hoses and the inhalers. Meanwhile, it was all being carefully videoed and put out by rich Arab country propagandists. There’s the distinct possibility that we’ve been deluded,” the former ambassador added.

Ford proceeded to lash out at the Trump administration for taking information from the White Helmets at face value. “I think the president’s advisers have served him extremely badly,” Ford said. “They’ve not been asking the hard questions like who are these White Helmets? Was the president told that these are the people involved with beheadings?”