For someone always skeptical of big money-big business tied to anything in the realm of medicine or science in general, I have lifted myself way beyond hope when it comes to any amount of efficacy in medicine or all the other nodes tied to our modern industrial-postindustrial world.

The vaccination debate is a misnomer in itself, since the debate is really an attack on anyone who dares question the science and chemistry and genetic engineering of the vaccine industry, an industry that plows through so many of our rights as citizens, individuals and patients. We have states and school systems ordering people of all ages to submit to the needle. 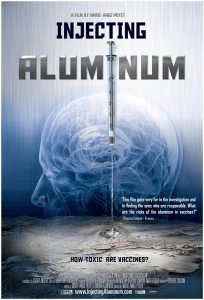 A new film airing in May, Injecting Aluminum, looks at a specific aspect of the vaccine “debate” through what easily is the one giant Gordian knot metaphor of the entire vaccine injury and death history – the adjuvant aluminum hydroxide developed in the 1920s as the “best” optimizer of the immune response when injecting the disease.

The subtitle of 90-minute film by director Marie-Ange Poyet, How Toxic are Vaccines?, really takes the…