Janine Jackson interviewed Jocelyn McCalla about the Haitian uprising for the July 13, 2018, episode of CounterSpin. This is a lightly edited transcript. 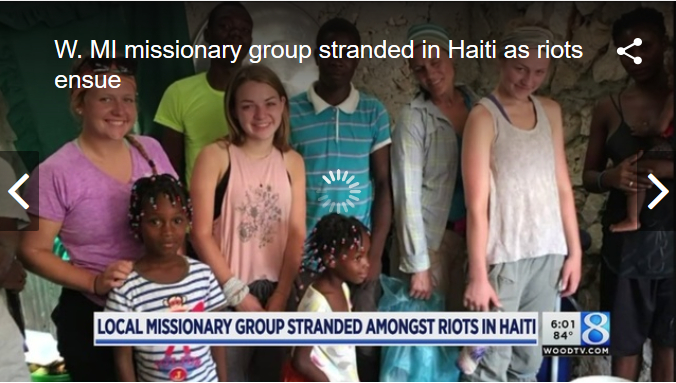 Judging by headlines, one might assess that the significant thing about public protests in Haiti is that they have interrupted the travel of US missionary groups. Reading further, you may learn that the immediate spark for the unrest was a proposed hike in fuel prices, a 38 percent increase in the price of gas, 47 percent for diesel and 51 percent for the kerosene many people use to heat and cook.

But in general (the Miami Herald‘s Jacqueline Charles was a notable exception), big US media outlets just don’t seem all that interested in what’s happening in Haiti. And so stories focused on Americans who “tried to help, but got caught up in violence,” take center stage, reinforcing a media storyline that has tended to present Haiti as a place of almost inherent chaos and a bottomless pit for international aid.

It’s a sad, static vision that doesn’t encourage much thinking about positive ways forward for Haiti and Haitians. Joining us now to help shed a different light on things is Jocelyn McCalla, the longtime director of the National Coalition for Haitian Rights; he’s now advocacy coordinator for the group Haitian-Americans United for Progress. He joins us now by phone from Brooklyn. Welcome to CounterSpin, Jocelyn McCalla.

Jocelyn McCalla: Thank you for inviting me.

JJ: I understand that there had been news of this fuel price increase before July 5; it was not a total surprise. And the fuel hike, which the government subsequently rescinded, is really only one of a number of things feeding frustration among many Haitians, and between many Haitians and the leadership of President Jovenel Moïse. What more is there to this situation, that maybe we’re not getting from news reports? 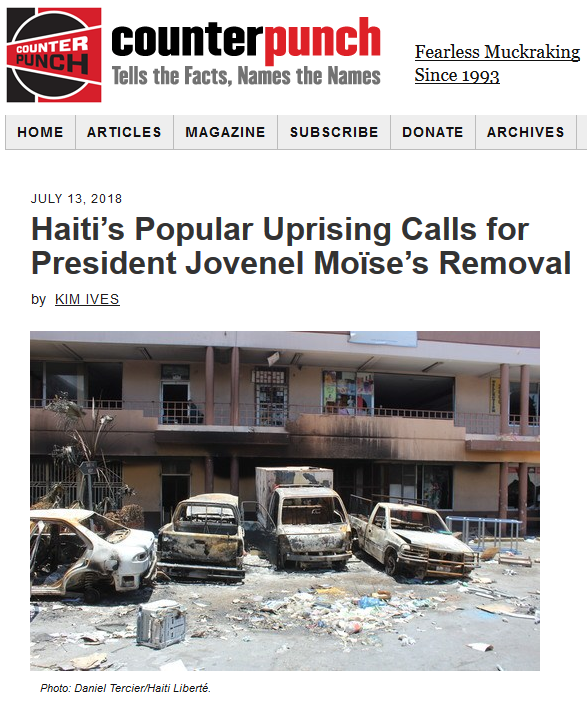 JM: That is absolutely correct; frustration with Haitian government policy has been building up for quite a long time. So the announcement that fuel prices were going to be hiked, to what many Haitians believe are an unacceptable level, essentially tipped things over, and Haitians expressed their frustrations visibly, with street demonstrations and taking their ire against several businesses that had shut up shop—not in the capital city of Port-Au-Prince, which is what a lot of media are reporting, but in its outlying suburb of Pétion-Ville, which in fact has become the economic center of Haiti ever since the 2010 earthquake.

So let me very quickly run through some of the issues that Haitians have faced over the last several months. The government has lavishly spent on itself, and very little on basic necessities and basic social welfare: schools, education, hospitals. A lot of the people working in the public sector have not been paid in several months. They basically live from hand-to-mouth, and essentially they have to borrow money or live on credit. And the fact is that their debt and their obligations are increasing, while the government has done nothing to alleviate their distress. That’s one issue.

The second issue is that for months, the people have been saying, given the rate of inflation in Haiti, which has been quite high, cost of living has gone up and there has been demand for wage hikes, which has been completely ignored. So in fact, when people compared the price hike for the gas and what the wages would deliver, it’s essentially on the same par. So most Haitians live on about $3 a day; I mean, if they are employed, then they get about $3 a day, and the gasoline price hike would rise about $5 a gallon, which meant that for a worker who has a steady job, it would become nearly impossible to save any money, or bring back any money to home where they could feed their family. Those are the kind of the things that rarely get in the news, as you mentioned earlier.

The third thing I would mention is that when I said, for example, that the Haitian government has lavished privileges upon themselves, they also, they and their own associates, have engaged in several land grabs, using the power of government, using their authority, using brute force, to essentially kick people out of their property.

In fact, a week before the price hike, or perhaps even less than that, the president ordered several dwellings near his home to be destroyed. People were just given a few hours to essentially leave everything behind, leave the property that they had behind. And very quickly, bulldozers came in and destroyed their homes. And all for, allegedly, the fact that the president wanted to build a heliport so that he could avoid the huge traffic jams that are now a daily occurrence in Port-Au-Prince and in Pétion-Ville.

So those are the kinds of things that Haitians have been frustrated with. So when the government basically said, “Hey listen, we’re going to raise the price of gas, everything is going to be costing much more. And the fact is that is going to lead to the IMF and the World Bank and the international financial institutions providing us with money, so that we can cover our costs, our budgetary costs, normal, routine budgetary costs,” people basically said, “You know, this is not going to happen. This is silly, this is unacceptable, and we’re not going to have any of it.”

JJ: I read a quote from a former prime minister, saying that, “Because Moïse didn’t have a strong, structured opposition in front of him, he thought he had the political capital to impose an unpopular measure.” So what can be said about other forces? Is there a sort of counterforce to the machinations of Moïse within the Haitian government? Who can people look to?

JM: I think a lot of the structured political parties have become weaker, in fact, as has been reported. But I think that the part of what Mr. Moïse and his acolytes in government are seriously underestimating is the frustration of people who are essentially tired of being taken for granted, tired of bearing the cost of poverty and being mired in poverty, for how many years, and whose only exit out of this might be, if it comes to pass, leaving for better refuge abroad. A lot of Haitians have migrated to Chile, to Brazil, to the Dominican Republic. They’re making their way out of Haiti, which is unfortunate, because what happens is that Haiti is losing some of its best, able-bodied people to migration.

JJ: Let me ask you, finally, about the diaspora. When Donald Trump made his vulgar and insulting comments about Haiti, along with other countries where black and brown people live, this January, and apparently specifically asked, “Why do we want people from Haiti here?,” your response at the time was to say, “Haitians in the United States should keep your eyes on the prize and don’t get distracted.” What are some of the things that you mean by that, and has Donald Trump changed the experience or the feeling in the Haitian community here? 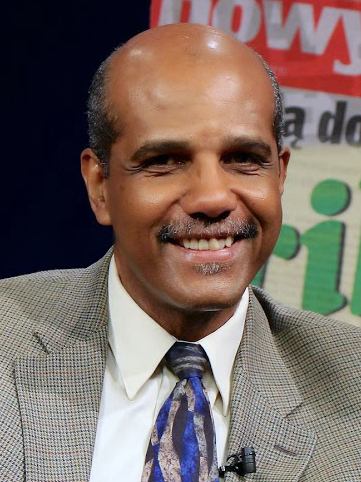 Jocelyn McCalla: “What we have here is a situation in which, as people organize themselves, as people structure themselves to fight back, we’ve seen the government push back on policies as well.”

JM: Obviously, Donald Trump’s putting down Haitians in the most vulgar terms has essentially made Haitians realize that if they’re going to fight for their rights in this country, then they are going to have to stand up, and they are going to have to organize themselves in such a way as to pick up the struggles that in fact led to the growth of the Haitian community from the 1970s on. To a certain extent, the policies being carried out by the Trump administration today are no different from policies that Haitians experienced themselves in the ’70s and ’80s. There was a “Haitian Program,” the kind of attitude, very negative attitude, against Haitians prevailed in the ’70s as well, because basically you had people in what was then the INS saying, “We don’t want these Haitians here. We don’t want them. We don’t want these black people.” Which, in fact, led a lot of the civil rights groups in this country to pick up the Haitian struggle, and their struggle for asylum and refugee rights.

But this said, the fact is that when we said, “People have to keep their eyes on the prize,” that meant that, one, organize yourself; two, Mr. Trump is not the last person who has got a say on this; I mean, there are other institutions in the United States that have say in what will be eventually the immigration policy of the United States. Obviously, the president has a lot of power, as the Supreme Court has indicated, in defining what immigration policy is. But the fact is that what we have here is a situation in which, as people organize themselves, as people structure themselves to fight back, we’ve seen the government push back on policies as well. So that’s why we say, “Keep your eyes on the prize and organize, organize and organize.”

JJ: We’ve been speaking with Jocelyn McCalla of the group Haitian-Americans United for Progress. They’re online at HAUPinc.org/. Jocelyn McCalla, thank you so much for joining us this week on CounterSpin.

JM: It’s been my pleasure.