Yesterday we noted that financial markets have become completely uncoupled from reality and that the recent feeble bounces between the 20-day and 50-day chart points were essentially the rigor mortis of a dead bull. As it happened, we were able to share those sentiments with what remains of CNBC’s audience of carbon-based units:

As we also noted as per the chart point mavens, the 20-day average down at 2703 (red line) on the S&P 500 was supposed to represent “support” while the 50-day average (blue line) purportedly functioned as “resistance”.

Well, upon the official announcement of the Donald’s lunatic trade war, there she sat at yesterday’s close – less than one point under the 50-day moving average at 2739.8 (blue line).

But rather than “resistance”, which the raging robo-machines ripped through today like a hot knife through butter, we’d say the blue line represents the last frontier of sanity. That’s because a stock market trading at 25X earnings under today’s baleful circumstances is nothing less than a brobdingnagian bubble (i.e. a huuuge one) frantically searching for the proverbial pin.

We essay the razor sharp aspects of the pin below, but suffice it to say here that the cyclical calendar has just plain run out of time. It is way, way too late in the cycle at 105 months of age to be “pricing-in” anything except the end of the party. And this bubblicious party has embodied the most spectacular central-bank fueled mania yet – meaning that the morning after is going to bring a truly hellacious hangover. 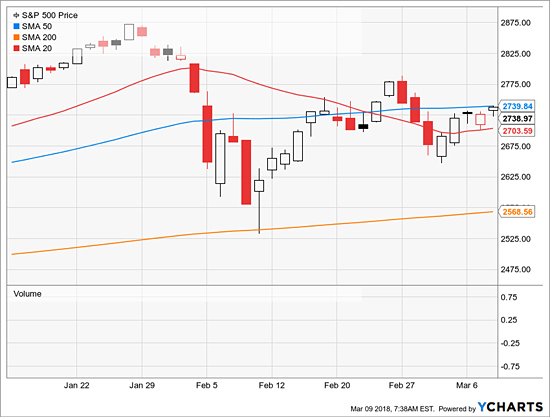 Among the many sharp edges of the pin are these: