The Institute of Economic Affairs, a think tank favored by ex-prime minister Margaret Thatcher, has called for the legalization of cannabis, claiming it could raise £1 billion ($1.3 billion) in taxes every year.

The IEA has joined the growing number of voices, campaigners and business organizations calling for the class-B drug to be decriminalized, arguing that it would be a “win-win-win” situation as it takes “lucrative business” out of criminal hands while boosting revenue for the country.

The black market is estimated to generate some £2.6 billion ($3.4 billion) a year from the sale of 255 tons of cannabis to over three million users, according to the think tank. The IEA was once praised by Thatcher – popularly known as the ‘Iron Lady’ – for creating the “climate of opinion” that ultimately saw her assume office in Downing Street. 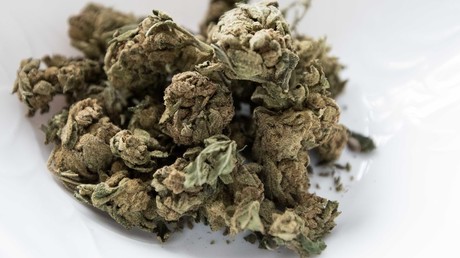 The IEA also highlighted how additional profit would be generated by alleviating the burden of public health services coping with issues related to the ‘skunk’ strain of cannabis, which has been linked to psychotic disorders. A study by King’s College in February found that the high-potency strain makes up nearly all of the cannabis currently sold on Britain’s streets.

“The dominance of hazardous, high-strength ‘skunk’ cannabis in the black market should be a key reason for legalization,” says the IEA report. “Licensed sales would allow safer, regulated cannabis to displace the more dangerous strains and generate tax revenue that could be spent on mental health services.”

Costs relating to the seizing of cannabis and related prosecutions would also be slashed were the class-B drug to be legalized.

The IEA’s intervention comes as the height of a political debate over whether medical cannabis should be legalized, after the high-profile case of 12-year-old epileptic boy Billy Caldwell. He suffered from up to 100 seizures a day, though upon taking cannabis oil, his condition improved dramatically. Caldwell had no seizures for almost a year, but they returned when his supply of the drug was confiscated by the Home Office earlier this month.

Amid mounting pressure from campaign groups, MPs, and doctors, Home Secretary Sajid Javid said there would be a review of the scheduling of medical cannabis.

Chris Snowdon, head of lifestyle economics at the IEA, said: “It’s high time for reform of cannabis policy in the UK. Canada and the USA are showing the way. Done properly, the legalization of cannabis is a win-win-win: criminals lose a lucrative industry, consumers get a better, safer and cheaper product, and the burden on the general taxpayer is reduced.”