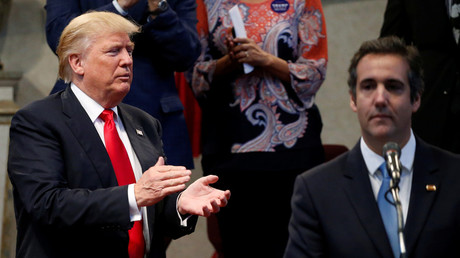 US President Donald Trump’s disgraced former lawyer Michael Cohen has re-registered as a Democrat, taking his flip-flopping on his former boss to the logical extreme. Until June, Cohen served as the RNC’s deputy finance chair.

After pleading guilty to tax fraud, bank fraud and campaign finance violations in August, Cohen has been actively cooperating with the ‘Russia collusion’ probe, and was reported to have sat down for hours of interviews with FBI Special Counsel Robert Mueller.

The announcement of Cohen’s latest about-face was carried by his lawyer, Lanny Davis, on Twitter, who called Cohen’s decision to change parties “another step in his journey” on which he embarked in July, when he told ABC in an exclusive interview that he would put his country and family before Trump.

2-Today, @MichaelCohen212 returning to the #Democratic Party another step in his journey that began with the @ABC @GStephanopolous Cohen putting family and country first -distancing himself from the values of the current Admin – Can’t wait for his first interview! #StayTuned

“I will not be a punching bag as part of anyone’s defense strategy,” he said. Cohen insists that he paid $130,000 to Daniels at the personal direction of Trump, who thus encouraged him to commit a crime. Trump has dismissed Cohen’s account of events, accusing his former lawyer of making up stories to curry favor with the prosecution amid an ongoing Russia probe.

While many former Trump officials are now on bad terms with the President, – look no further than former White House chief strategist “sloppy” Steve Bannon or former White House aide Omarosa Manigault-Newman, – Cohen’s flip seems the most extreme, as it was only last September that he vowed to “take a bullet for the president.”

However, a brief look into Cohen’s own political history suggests that he is not a stranger to changing party affiliation. Cohen’s latest excursion into Republican territory only began in March last year, when he proudly announced  that he had officially joined the Republican Party.

In April, Cohen, then known mostly as Trump’s longtime confidante, began to serve as the Republican National Committee’s (RNC) deputy national finance chairman. He resigned from the post in June.

Cohen has been flitting between red and blue for years now. He waded into the political waters in 2003, running for a New York City Council seat as a Republican. He lost to Democratic candidate Eva Moskovitz, who won by a landslide.

In 2008, Cohen reemerged as a Democrat and voted for Barack Obama. He later explained that he grew disappointed with the Obama administration, which he said was turning the US into a “third-world nation.”

Cohen’s latest switch has faced a barrage of online mockery on Twitter from conservative commentators.

As recently as June he was the Republican Party’s deputy finance chair.

Michael Cohen is now a Democrat. My. Sides. He has totally flipped on Trump! Well, at least Trump still has Kanye and Kid Rock. *snort* #MTPDaily

mueller: thanks for ur cooperation
michael cohen: i switched to democrat
mueller: that wasn’t neces
cohen: i pierced my left ear
mueller: u didn’t hav
cohen: i threw away my right foot shoes
mueller: i di
cohen: im learning to throw with my left
kanye: will u play catch with me?

While some liberals rushed to heap praise on the lawyer’s decision, others said that no amount of repentance will make Cohen welcome in the Democratic family.

Don’t care if Michael Cohen now calls himself a Democrat. Don’t care if he starts building Habitat for Humanity houses with Jimmy Carter. He’s one of the biggest reasons our country is in this mess and nobody is going to forget that anytime soon.