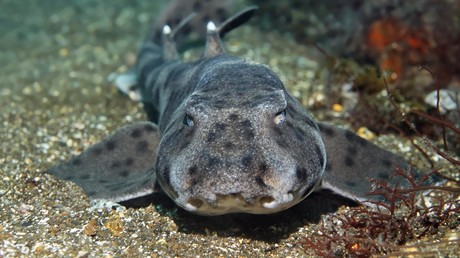 A man has been arrested in connection with the theft of a horn shark from a public aquarium in San Antonio, Texas. The suspect and his accomplices wheeled out the animal wrapped in a blanket and in a baby carriage.

The almost cartoon-like heist, which the local police initially thought was a hoax, played out on Saturday afternoon in San Antonio Aquarium, as it was packed with unsuspecting visitors. CCTV footage shows a man pulling the small shark out of the basin, carrying it to the back room and returning with something, apparently the said shark, covered in a thick blanket in a bucket. The man is then seen putting the bucket inside a baby stroller and leaving the aquarium, accompanied by a man and a woman, thought to be his accomplices.

An aquarium employee attempted to stand up to the man in the parking lot, insisting he open the trunk of his truck. However, the man refused to comply with the request, claiming his son was feeling ill and he must drive away immediately. The man apparently was indeed in a rush as he left behind the two other alleged members of his shark-napping gang

As news of the grand pool robbery spread through the community, many locals alerted the police of a truck resembling the description near a property. As police swooped on the house, they discovered the shark, visibly well and unharmed, swimming in a tank in the man’s garage. It turned out the man was not some type of a shark poacher greedy for money, but an animal lover who kept scores of other sea creatures in his improvised home aquarium, police said.

“He had a lot of different marine animals in the home. [He] very much knew what he was doing – kept that animal alive and was able to continue to see that animal thrive, which was pretty shocking to all of us,” Leon Valley Police Chief Joseph Salvaggio said, as cited by KSAT12.

Salvaggio said that the man, who has not been identified, “had some knowledge on how to deal with these types of animals,” noting that otherwise the theft would not have made any point.

The suspect could be a grief-stricken shark dad looking for a new pet – Salvaggio revealed he “had had one of these in the past,” but the fish in that case had apparently died. It is believed the man wanted to keep his newly-stolen shark so much that he even tried to dupe a police officer by claiming it wasn’t the stolen shark at all, but an identical one he had bought. But what turned out to be a forged receipt did not persuade the inspector, who took the man into custody.

It remains to be seen if the woman who allegedly was involved in the robbery will also face any charges. At present, the case has been handled as theft of property estimated to cost from $750 to $2,000. The aquarium put a tag of around $2,000 on the shark. It’s unclear if police will push for any federal charges as it is consulting on the matter with the National Oceanic and Atmospheric Administration.

Although the shark was back in its aquarium by Monday evening, the stress the poor fish endured during the ordeal might affect its chances of survival, which is not yet guaranteed. It is said that the bucket used to spirit the shark away was filled with bleach solution, posing a substantial health risk for the disoriented creature.

The man’s self-made aquarium and its inhabitants were left in the care of the woman captured on the video, who was not arrested immediately, as she has children in her care.