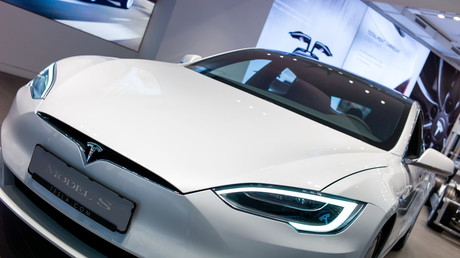 Burn me once, shame on you, burn me twice, shame on…Tesla. A silver Model S mysteriously caught fire twice on a single Tuesday in California, the blazes occurring several hours apart with no apparent cause.

The Tesla first ignited in a Los Gatos tire and auto repair parking lot after the owner – identified only as “Chris” – had it towed there to fix a flat tire. He emerged from the shop with an employee only to find smoke pouring from the hood and a hissing sound coming from the car. The shop called the fire department, and not a moment too soon…

Fire crews were quick to arrive and extinguish the inferno, though the Model S’s batteries continued to burn after the rest of the flames were long gone and crews remained near the car to avoid a repeat performance. As an NBC report explained, “Tesla batteries tend to reignite.”


After “hours of back and forth” with the electric car manufacturer, the Tesla’s owner opted to wash his hands of the charred and twisted vehicle. Though the car was just three months old, and Teslas certainly aren’t cheap, he pointed to “the lack of customer service and safety concerns” as his reasons for walking away.

And it’s a good thing he did walk away. Hours after another tow truck had removed the Tesla to a tow yard in nearby Campbell, it caught on fire again. Fire crews stood vigil over the smoldering hulk for several hours more to ensure it didn’t light up a third time.

“No more Teslas!” the owner told NBC emphatically. “If this car was in the house and we were on vacation, and this thing caught fire in the garage, the whole house could go under!“