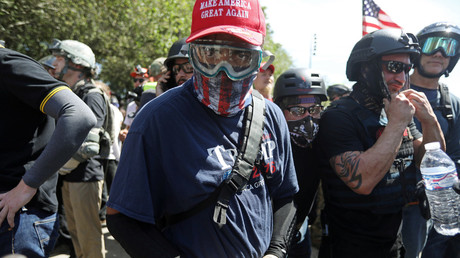 Hundreds of demonstrators from the right-wing Patriot Prayer group and Antifa activists have launched rivaling protests in Portland. There’s heavy police presence on site after similar events earlier this year ending in violence.

The opposing crowds, described as “giant” by the local media, have gathered at Tom McCall Waterfront Park on Saturday.

The police in riot gear have been so far able to keep the two groups separated on opposite sides of the street, with only minor incidents occurring.

So it’s noon in #portland and right now police are keeping the two sides separated. Hundreds of Anti-fascist counter-protesters with a brass band look across the street at Proud Boys and Patriot Prayer. More PBs and PP on their way. #AllOutPDXpic.twitter.com/m3cIokJxKx

A video emerged online of a rightist demonstrator being hit on the head with what looks like a baton or an umbrella as the Antifa protestors tried to rid him of an American flag.

Trouble is feared at the event after the Patriot Prayer leader, Joey Gibson, urged his supporters to bring arms to the gathering.

The police vowed to prevent violence at the rally by introducing barricades, weapon checks and sniffing dogs.

The two previous rightist demonstrations held Portland ended in bloody clashes and saw one man sent to the hospital with a fractured skull.