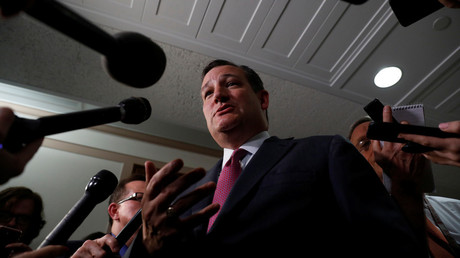 Ted Cruz may have urged voters to choose a Democratic candidate instead of a self-confessed Nazi running for a congressional seat in Illinois, but the internet is giving him very little credit for speaking out.

Cruz took to Twitter to condemn Arthur Jones, the Holocaust-denying Republican candidate for the third district of Illinois, ahead of the November midterm elections. Jones won his place on the ballot after Republicans failed to nominate a candidate to run against him in the primary election. The district is usually a safe seat for the Democrats.

He later won the primary by running unopposed. Jones told Politico that he was running to counter a “two-party, Jew-party, queer-party system.”

READ MORE: ‘Absurdity of gerrymandering’: US Nazi is the only GOP contender for congressional seat

Writing in a tweet, the Texas senator called Jones’ place in the congressional race as “horrific” and said: “This bigoted fool should receive zero votes.”

This is horrific. An avowed Nazi running for Congress. To the good people of Illinois, you have two reasonable choices: write in another candidate, or vote for the Democrat. This bigoted fool should receive ZERO votes. https://t.co/9WYlvCMKaF

Twitter users were quick to highlight perceived hypocrisies in Cruz’s stance, pointing out that he had remained silent after his former presidential campaign co-chairman, Republican lawmaker Steve King, refused to apologize for retweeting a message from a well-known British neo-Nazi.

… now let’s see if he condemns the Nazi sympathizer who he tapped as the national co-chair of his 2016 presidential campaign. pic.twitter.com/laTD5m5nOr

So you are more into the kinda sorta Nazis like Steve King?

Others pointed to the Republican Party’s association with other right-wing candidates such as Paul Nehlen, the “pro-white Christian American” candidate for Paul Ryan’s soon-to-be vacated congressional seat in Wisconsin; and Joe Arpaio, the former sheriff found guilty of contempt for ignoring court orders to stop immigration roundups. Arpaio, who was pardoned by Donald Trump last year, is running for the Senate in his home state of Arizona.

Some felt Cruz’s words were merely a cynical attempt to placate supporters who may be thinking of transferring their vote to Democratic opponent Beto O’Rourke ahead of his own senatorial race in November.

Between the (bad) family separation bill he introduced and this, it’s clear that Ted Cruz is nervous about his Senate race. And he should be. https://t.co/f41NaJxld8

A fair number of people took Cruz’s concern at its face, agreeing with the spirit of the remarks, and encouraging other politicians to join in the protest.