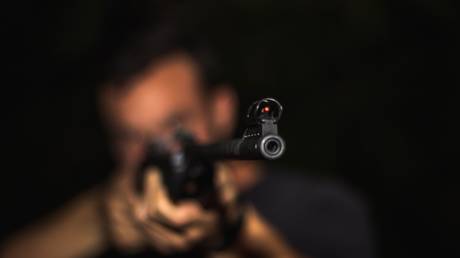 Indiana elementary school teachers were ordered to kneel against a wall before being shot “execution-style” from behind with airsoft pellet guns during a safety drill.

On January 4, some 30 teachers at the Meadowlawn Elementary School in Monticello underwent ALICE training which encourages teachers and students to be proactive when facing an active shooter, including rushing the attacker. Shooting teachers with plastic pellets does not typically feature in ALICE training, however.

“They told us: ‘This is what happens if you just cower and do nothing,’” an unnamed teacher told IndyStar. “They shot all of us across our backs. I was hit four times… It hurt so bad.”

Teachers testified that they left the training with welts, bruises and abrasions as a result of being shot with the pellet guns in a somewhat overzealous attempt at realism.

The teachers were taken into a room, four at a time, at which point they were shot, without any prior warning. They were also told not to warn any of their colleagues when they left the room.

During active shooter drill, four teachers at a time were taken into a room, told to crouch down and were shot execution style with some sort of projectiles – resulting in injuries to the extent that welts appeared, and blood was drawn.

“Educators should never have to endure being fired at with pellets in an active shooter training,” said Keith Gambill, vice president of Indiana State Teachers Association (ISTA), who added that he felt the training was “fear-based” and “injurious.”


The shocking revelations only came to light recently, during testimony in support of House Bill 1004, which addresses school safety and is aimed at improving mental health and emotional support services for students in state-run schools.

The teachers were terrified, but were told not to tell anyone what happened. Teachers waiting outside that heard the screaming were brought into the room four at a time and the shooting process was repeated.

“It’s a soft, round projectile,” Sheriff Bill Brooks said of the equipment used during the drills. “We were made aware that one teacher was upset. And we ended it.”