Most Syrians support their president and military, but the BBC presents Britons with a different, one-sided story, a British baroness and member of the House of Lords told RT, after returning from a trip to the war-torn country.

Caroline Cox, a baroness and Life Peer in the House of Lords, recently returned from a tour of several Syrian cities, during which she spoke with a “wide range of people,” including government officials, opposition leaders, artists, intellectuals, writers and ordinary Syrians walking in the park.

According to Baroness Cox, despite claims from western governments and media outlets, the vast majority of Syrians are thankful to President Bashar Assad and the Syrian and Russian militaries for fighting Islamic State (IS, formerly ISIL) and jihadist groups.

The Syrian people “are very grateful to the Syrian Army, to Assad and, I may say, for Russian help in getting rid of the terrorists. They are the perpetrators of the most appalling atrocities and killings.” 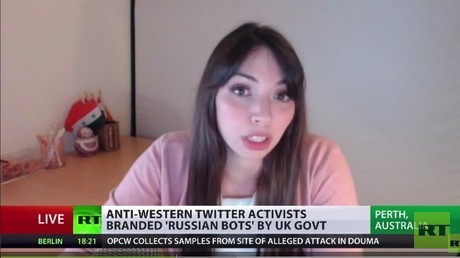 However, British media like the BBC have done a poor job of accurately conveying this public attitude, Baroness Cox told RT.

“People are very keen to hear the point of view from people inside Syria. It’s widely felt and widely reported that BBC reporting is very biased and very one-sided, and so they really want a bigger picture.”

She also dismissed accusations that her trip to Syria was in any way inappropriate or was somehow staged for propaganda purposes.

The baroness explained how she spoke freely with random people she met in the park, “something that couldn’t have been ‘arranged’ by the government.”

“I talked to two delightful Muslim ladies, in one of the parks in Aleppo, and that wasn’t pre-arranged, and I asked them what they felt about the situation, and what they said was entirely consistent with what we’d hear in the formal meetings,” she said.

According to Cox, her message to the British people – and to the entire world – is very simple: “Please, may we leave the Syrian people the freedom to decide their own future.”