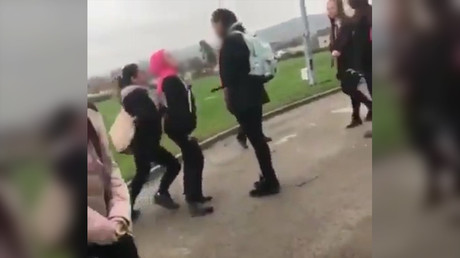 A Syrian refugee attempted to cut her wrists after she was filmed being attacked by school bullies. She was assaulted on the exact day her brother was filmed being ‘waterboarded’ at the same school.

The distressing footage, which appeared online on Thursday, shows the girl, who is wearing a bright pink hijab, suddenly being pushed from behind by another pupil. A second teenager then pushes her too, sending her rolling down a slope.

The attack left the girl, who is yet to be identified, so distressed that she tried to cut her wrists, her family lawyer said. But it appears it wasn’t just that incident that triggered her suicide attempts, as she has apparently been bullied at Almondbury Community School in Huddersfield for the past year and a half.

It comes a day after the country was shocked by the footage of her 15-year-old brother, known as only as Jamal, being ‘waterboarded’ in the same West Yorkshire school.

His attacker is seen pushing Jamal to the ground and then forcing liquid from a bottle into his mouth as he says “I’ll drown you”.

A 16-year-old is to be charged over the attack on October 25 which left the victim’s arm in a cast. Police are now investigating the crime as a racially-aggravated assault.

Referring to the video of the attack on Jamal’s sister, lawyer Mohammed Akunjee told the Daily Mirror: “She had her headscarf ripped off in the playground. This is despite us complaining to the school about the abuse.

“She has also attempted suicide, and tried to cut her wrists, the level of bullying got so much.”

In a statement, West Yorkshire Police said they are aware of the new footage and they are “liaising with the girl’s family who we are continuing to support.”

A peaceful rally is currently being held in Almondbury, to support Jamal and protest against bullying.