A Syrian militant group chief shielded from the UN terror list by the US despite its links to ISIS and Al-Qaeda reportedly had no trouble entering Washington on a European passport. The State Department refused to speak on “visa records.”

Labib al Nahhas, who calls himself “a chief of Foreign Political Relations at Ahrar al-Sham,” arrived in the US capital for a visit lasting a few days in December, according to McClatchy DC news. The report cites “four people with direct knowledge of the trip.”

As one of them told the network’s reporter, Nahhas arrived in the US to speak with “third parties” even though he would not elaborate further. The other speakers revealed a few more details about the visit, saying that Nahhas had been in Washington to meet with lobbyists and Middle East researchers.

Born in Madrid to a Syrian Muslim father and educated in the UK, Nahhas has been using his European roots to reach out to western officials on behalf of Ahrar al-Sham, a group which espouses a strict Salafist form of Sunni Islam and has fought in alliances with Al-Qaeda-linked fighters. In mid-May, Ahrar al-Sham admitted its involvement in a brutal raid at an Alawite Syrian village, reportedly alongside fighters from internationally-recognized terrorist group Al-Nusra Front. 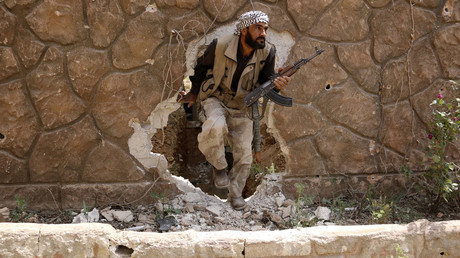 Well-versed in social media and fluent in English, he has been spreading Ahrar al-Sham’s agenda on Twitter and via op-eds, including respected publications such as Britain’s The Daily Telegraph.

RT asked the State Department’s spokesperson Mark Toner whether US officials were aware of that visit in December. He suggested his office did not know about it at all.

“I’m not sure that we were aware of it,” Toner replied. “I don’t believe he had any meetings here, certainly, but – and I can’t speak to visa records. It’s a privacy consideration, so I don’t have much detail I can share with you regarding whether he received a visa to come here.”

While Nahhas’ visit still might seem curious given the US’s scrutiny when it comes to visitors with suspected terror links, the Syrian opposition did not consider this visit to be anything unusual. As one opposition official explained to McClatchy, Ahrar al-Sham was “not among US-designated terrorist groups.”

Yet, in Washington, Ahrar al-Sham’s links to recognized terrorists are well-known. In fact, the US shielded the group from the United Nations’ blacklist, which would officially exclude it from the Syrian ceasefire and allow it to be attacked along with Islamic State and Al-Qaeda.

On May 11, Washington blocked a Russian proposal to the UN to delegitimize Ahrar al-Sham along with another group called Jaysh al-Islam over their regular violations of the Russia-US brokered ceasefire. The US’ decision was also shared by Britain, France and Ukraine.

“Russia is publicly attempting to designate groups that are parties to the cessation of hostilities,” the State Department said on that day. “Such actions, we continue to believe, would have damaging consequences to the cessation just as we are trying to de-escalate the situation on the ground.” 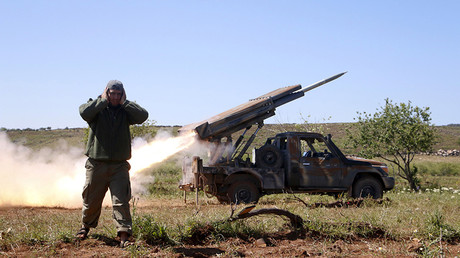 When asked about obvious similarities between groups such as Ahrar al-Sham and the sanctioned Al-Nusra Front and Al-Qaeda, the Department said that it was continuing “to have dialogue” with them, but still has not changed its position.

The next day after the statement, insurgents from Ahrar al-Sham together with Al-Nusra fighters captured an Alawite village Zara from government control in western Syria, brutally killing and kidnapping civilians.

Ahrar al-Sham admitted responsibility for the raid, but told Reuters that it did not touch those who did not resist.

“Civilians were not targeted. On the contrary factions made great effort to spare civilians and deal with prisoners humanely,” the groups spokesman said.

However, villagers who spoke with RT Arabic called the raid “a massacre,” saying that militants killed elders and “entire families,” kidnapped children and women.

When asked whether the US still believes that “this group cares much about the cessation of hostilities,” the State Department’s spokesperson said that he did not know about the “incident.”

“I don’t know about that particular incident. I can look into it,” he replied, reiterating America’s support to the members of the Syrian opposition’s High Negotiations Committee (HNC).

Last week, another State Department spokesperson, John Kirby, tried to shift the blame onto the International Syrian Support Group (ISSG) and “more than twenty nations.” He stressed that Russia was among those countries, which agreed that only Islamic State and Al-Nusra would be excluded from the ceasefire.

When asked by RT why the US was blocking Russia’s proposal at the UN to extend the UN blacklist, Kirby said he would not “get into internal deliberations.”

Instead, he went on to accuse Gayane Chichakyan of “trying to put everything on the United States” and referring her to “all the members of the ISSG.”

The question about the motives behind Washington’s decision at the UN was left unanswered.