On Thursday 10 May 2018, an unprecedented exchange of strikes happened between Israel and Syria. The monopoly media, as well as some “alternative” media like Russia Today, were quick to relay the Israeli army version, according to which the Zionist entity “retaliated” to an “Iranian attack by Revolutionary Guards’ Al-Quds Force” consisting of “twenty rockets” fired at Israeli positions in the occupied Golan, four of which were “intercepted by the Iron Dome” and the others “crashed into Syrian territory”, no damage being recorded in Israel. Israel has reportedly responded to this unprecedented “act of aggression” by a “large-scale operation” that would have destroyed “the entire Iranian infrastructure in Syria”, in order to deter the Islamic Republic from any stray impulse of future strikes.

This narrative takes for granted the postulates, data and myths of the Zionist entity’s propaganda – which imposes permanent military censorship on the Israeli media, exposing any offender to a prison sentence; and reading the international media, one might get the idea that, like American economic sanctions, this censorship is extraterritorial – but none of them can withstand scrutiny. 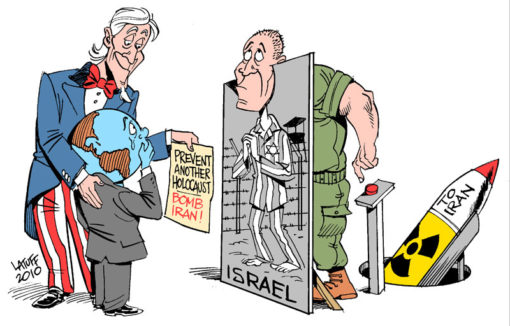 The aggressor is undoubtedly Israel, who carried out more than a hundred strikes against Syria since the beginning of the conflict. After Duma’s chemical stage attacks, this aggresion intensified with attacks on the Syrian T-4 base on April 9, which…