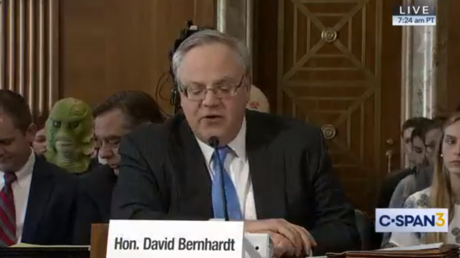 Donald Trump’s pledge to “drain the swamp” took a bizarre turn when ‘swamp monsters’ turned out to protest against his nomination for interior secretary.

(1) So why did we bring these swamp creatures to David Bernhardt’s confirmation hearing for Interior Secretary this morning? Well… Bernhardt is a former oil and gas lobbyist who previously worked to help corporate polluters get their hands on public lands. pic.twitter.com/TrnqkhFQUv


Clean Water Fund, Environment America, Public Citizen and Greenpeace were involved in the joint demonstration targeting Bernhardt as a former oil and gas lobbyist who they say “worked to help corporate polluters get their hands on public lands.”

“Now he’s about to become head of the Interior Department – which would put him in charge of the very same public lands and waters that he worked to get access to as an oil & gas lobbyist,” the Greenpeace wrote on Twitter.

(7) It couldn’t be any more clear that David Bernhardt should be the LAST person to overlook America’s public lands, water and wildlife. YOU can still #StopBernhardt by calling your Senator at 1-213-335-2077 & telling them to reject Bernhardt’s confirmation! pic.twitter.com/PkBV6jPXA1

The use of a swamp monster mask was inspired by Trump’s election promise to “drain the swamp”, which the activists say is the exact opposite of what he’s achieved.

Greenpeace activist Irene Kim, who was seated directly behind Bernhardt, said she donned the mask after learning she had made it into C-SPAN’s footage of the hearing, but was asked to leave the room for being disruptive.