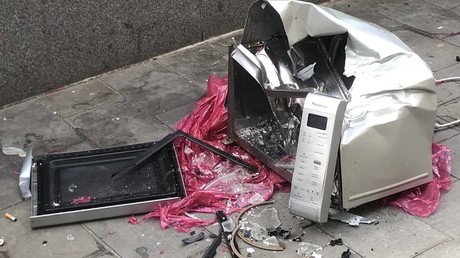 The City of London went into lockdown on Friday morning amid a bomb alert over a suspicious package, which turned out to be an old microwave. The item was spotted just outside the capital’s iconic Gherkin building.

Reports of a suspicious package at the Gherkin’s address, 30 St Mary Axe, broke during rush hour. People were told to stay away as a bomb squad was deployed to the scene. A robot was subsequently used to blow up the microwave, which had been placed next to the entrance of the landmark car park.

“The cordons put up around St Mary Axe due to a suspicious package have been lifted and the area is now clear,” City of London police said in a tweet. “No cause for alarm – the box turned out to be a discarded electrical item.”

The incident on Friday is one among the many false alarms keeping the country on edge amid fears of another terrorist attack. Police have been on their marks ever since the UK was rocked by five attacks in 2017 that killed 36 people and injured many more.

People who witnessed the drama have taken to Twitter to share their moment of suspense as officers carried out the explosion, while others have seen a lighter side of the story.

Some even took the time out to hold a Mario-Kart marathon while stuck in the stairwell during #MicrowaveGate.